Since publishing our new logo, we have received several requests for an explanation behind our image. We see the validity in such a request, and have decided to respond accordingly.

For those unfamiliar with the origins of Lot’s Wife, it is a biblical reference in the Old Testament. The story goes that God had intended to destroy the towns of Sodom and Gomorrah after they had become a riddled with scandalous activity. Lot had pleaded with God not to destroy the cities and reached a compromise; if he could find one good person in either city, Sodom and Gomorrah would be spared. God agreed, on the condition that if the cities were destroyed, Lot and his family would be forced to flee, and not look back, lest they be turned into a pillar of salt. Unable to find goodness within the cities, Lot and his family fled. As the cities burned, Lot’s wife decided to look back upon her people as she fled, and consequently was punished. Hence the magazine’s tagline, ‘Don’t Look Back’.

Upon discussing ideas for our new logo, the question arose of what Lot’s wife would look like had she been alive today. From there, we brainstormed the traits which we believed were fundamental to her character; strength, peace, confidence and a disregard for authority. The image that was ultimately constructed was carefully crafted as to exhibit such characteristics that not only represented her, but also reflected our ethos.

The shape of her body was modeled off a combination of Renaissance, Baroque and 1950’s film noir art. The artist acknowledges that all three of these periods were primarily dominated by the male gaze, as has unfortunately been the case with most art throughout history. Although, the artist did not wish for her audience to ignore the significant role her own gaze played in the construction of the image. It is her own gaze, made in 2015, which renders the patriarchal objectification of women, powerless. In an effort to create the exact image desired, the artist took photographs of herself in the same position as is in the image, which as she explained to us, ‘is [a] self-reflexive…very postmodern practice’. In addition, the artist intentionally decided to draw upon these normative feminine characteristics in a manner that was ‘so blatantly so, that it became ironic.’

Finally, in collaboration with the artist, we decided that Lot’s wife would be lying on her side, in a manner which suggested that she was comfortable. This was done for specific reasons. In light of her controversial decision to defy authority in the best interests of the people she knew and loved, we wanted her to look at peace, and confident with the choice she had made. Regardless of the gender one identifies as, we as the current editors of Lot’s Wife believe that this is what we should all strive for as human beings. It is for these reasons, that the image of Lot’s wife was constructed as she was. 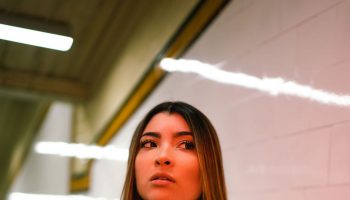