The hunt for a fabled panther and the “fake news” surrounding it:

It all started with a seemingly innocuous Facebook post. Douglas Chapman, a well-meaning, lonely, and argumentative retiree of Rosebud had taken to the ‘Southern Mornington Peninsula Noticeboard’ to vent his frustration with the new roadside safety barriers running alongside the Mornington Peninsula Freeway. “Never have I seen such a lacklustre effort for road safety,” he complained. Those “freeway noodles” wouldn’t save anybody, they are “looser than my bingo wings”. And a few people agreed that he had a point; a boring and pernickety point that would soon be drowned out by the quest for a mythical creature.

It didn’t take long for somebody to notice that Chapman’s apparently mundane photo of roadside barriers, seemed to have accidentally captured proof of a not so mundane creature; the fabled Victorian black panther! There on the far left of the photo, emerging purposefully from the bushes, was the shadowy figure of what appeared to be a large, black cat- surely it couldn’t be anything but a panther. Before long the post went viral. 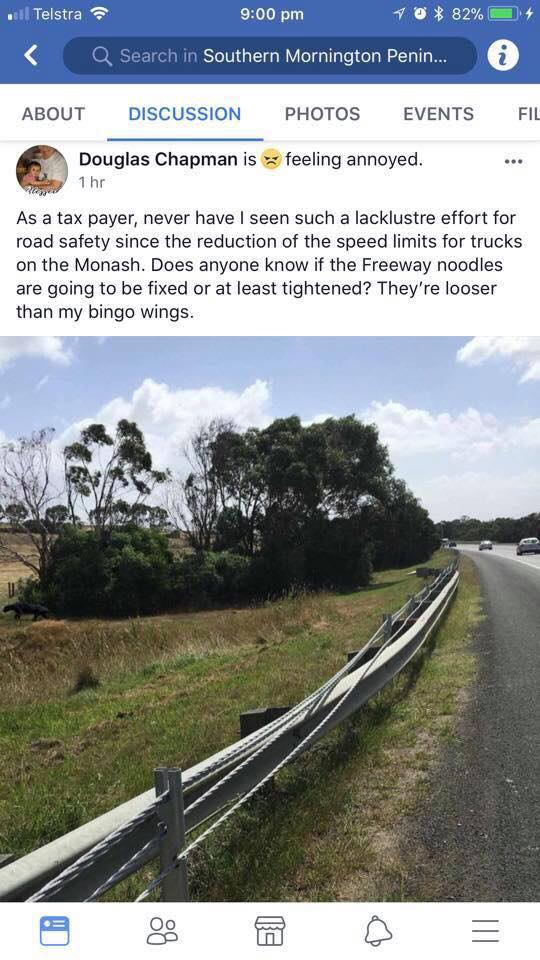 I was at work on the evening of the 3rd of March, so I missed the initial post and the Facebook furore it caused. What I did see however, was a hilarious string of messages in my favourite group chat. One of my mates, let’s call him Mim, had been having a bit of fun with one of his fake Facebook accounts. The original poster, Douglas Chapman, was fictional, no more real than the panther of which he supposedly caught a photo. Mim had found a photo of the Mornington Peninsula Freeway, photoshopped a black panther into the background, and then used another fake account to point out the panther in the comments section. That’s all it took for the post to go viral.

My friends and I were thrilled to see the story develop. 3AW ran a segment on the panther, next thing we knew Channel Seven had contacted Mim. By this stage Mim was beginning to feel a nagging guilt, a guilt that was no doubt cultivated by his Mum who thought the hoax had gone on long enough. Mim responded to Channel Seven telling them that Douglas Chapman didn’t exist and that the whole thing had been a prank.  That’s where the story should have ended; where it might well have ended if Channel Seven hadn’t decided they needed a good story on a slow news day. Despite being expressly told, straight from the horse’s mouth, that it was fake, Seven ran the story on their website anyway.

In the morning we woke to:

“Facebook complaint about road safety contains possible big cat in bushes- but can you spot it?”

It was a hastily written online article, replete with basic factual errors. Even apart from propagating the myth of a fictional creature using a fake photo as evidence, Channel Seven muddled up the location of the story and somehow ended up thinking the photo was taken on the Monash Freeway and more bizarrely thinking that the Monash Freeway ran across the Mornington Peninsula. It was a surprisingly uncritical piece considering they knew the story to be fake. It included comments from various citizens who decided that the photo constituted “actual proof of one [a panther] on the peninsula”. One man ecstatically wrote, “now people can’t say I’m crazy”. The article was subsequently deleted but the lie that inspired it lived on.

Soon the Herald Sun ran the panther story on their website. Unlike Channel Seven, the Herald Sun wasn’t aware it was fake and to their credit the piece was relatively critical. They admitted that there were rumours of photoshop and that the Facebook page had acknowledged it was a prank. Surprisingly the admission of a photoshop hoax didn’t stop the rumours, quite the opposite, people rose up to defend it. One comment captured the sentiment well, “It’s not photoshopped! The original poster was taking a pic of barriers he didn’t even see it [the panther]!!” It takes very little to create such a story, seemingly it takes a lot more to destroy it.

The panther frenzy came to a climax on the 6th of March when Channel Seven gave the story the video treatment and announced they had “discovered” that the photo was a fake. Even so they covered all bases by finding a scientist to say, “think of the other exotic animals already proven to be roaming in Australia, why not feral big cats?”

The Channel Seven reporter concluded her report stating that,

“There have been sightings of the big cat for almost 60 years… while this latest sighting doesn’t quite prove the existence of the fugitive feline, it sparks the start of a new search, for the mystery photoshop wiz.”

Well Channel Seven, how much money can you offer me for a tip off? Otherwise I might be approaching A Current Affair.