Conflicted Histories: A Reflection on Brook Andrew’s ‘The Right to Offend is Sacred’

I dedicate this exhibition to those who wish to see clearly the histories and legacies of the often unseen.

To the wealth of hidden memories, treasures, bodies and systems that sty in dark places, away from the light of so-called ‘light-giving’ civilisations.

‘Indigenous art has not yet fully escaped from the ethnographer’s classifying microscope and been allowed to speak to us on its own terms, to exert its power through metaphor as an undiluted expression of a particular culture.

…Visual art is a universal language that is open to all peoples to use and appreciate. The European construct is anthropology, a discipline and a methodology masquerading as a science, which evolved in tandem with social Darwinism as a means of studying and classifying colonised peoples and pigeonholing them into hierarchies.’

– Judith Ryan, ‘The Raw and the Cooked: The Aesthetic Principle in Aboriginal Art’

My first encounter with Brook Andrew’s art was when I saw the recent Sovereignty exhibition at ACCA. His work is striking, visually and physically imposing – audacious, defiant, challenging. In the middle of the gallery space a giant globe hung above my head, striped like the back of a zebra. Every few moments the globe’s colour would change – pink, blue, green, white, purple – like a warm pulse emitting through the room, casting a faint glow in the gallery space.

I found out later that this black and white patterning is a motif that reoccurs in Andrew’s art; it’s inspired from the carvings of Wirandjuri culture. This is one way tradition is refashioned in contemporary expressions.

The Right to Offend is Sacred is a solo-exhibition that surveys Brook Andrew’s art practice over his 25-year long career. Above the entrance to NGV’s exhibition one is confronted with the text, in pink neon:

The ‘primitive’ was, and continues to be, a colonial fantasy. European imperialism was imbued with a dual fascination and terror toward the savage, primitive ‘Other’; the alien, uncivilized races of barbaric lands. Across the globe, the colonised has been subjected to the dehumanizing logic of classification – European methods of collecting, categorising and displaying – as a specimen to be studied.

The first room in Andrew’s exhibition is dark; the walls painted black, the glow from a single line of neon that runs across the room the only source of light. The gallery contains what can only be described as layers of historical artefacts. A glass cabinet sits in the middle of the room; it displays books, newspaper clippings, maps, photographs. ‘THE PRIMITIVE MIND BOUGHT CLOSER TO OUR UNDERSTANDING’ is the title of one such historic work; it sits next to newspaper clippings and photographs of the atomic bomb testing conducted in remote communities in Australia during the 1950s’.

A central theme in Brook Andrew’s practice is the interrogation of historical archives, of challenging and subverting the hegemonic lens of western anthropology. Andrew views this exhibition at NGV Australia as a large scale ‘museum intervention,’ an opportunity to excavate and explore ‘hidden or alternative narratives.’ Through the reappropriation of historical and ethnographic artefacts, Andrew engages with questions of representation in institutions and spaces such as the museum gallery, unseating the conventional ways in which Indigenous culture has been presented. He deconstructs and scrutinizes dominant Western narratives, placing Australia at the centre of a global inquiry into the structure and legacy of colonialism.

Andrew deploys, layers, and destabilizes the archive through his subversive montaging of images, histories, and methodologies. His art defies simplistic categorization, often interweaving different materials, processes, and images into one work. Andrew pushes the boundary of his medium, juxtaposing photography and video with text and collage, painting and print, sculpture and installation. This dynamic intermingling of different mediums often results in art that is unexpected and disobedient. 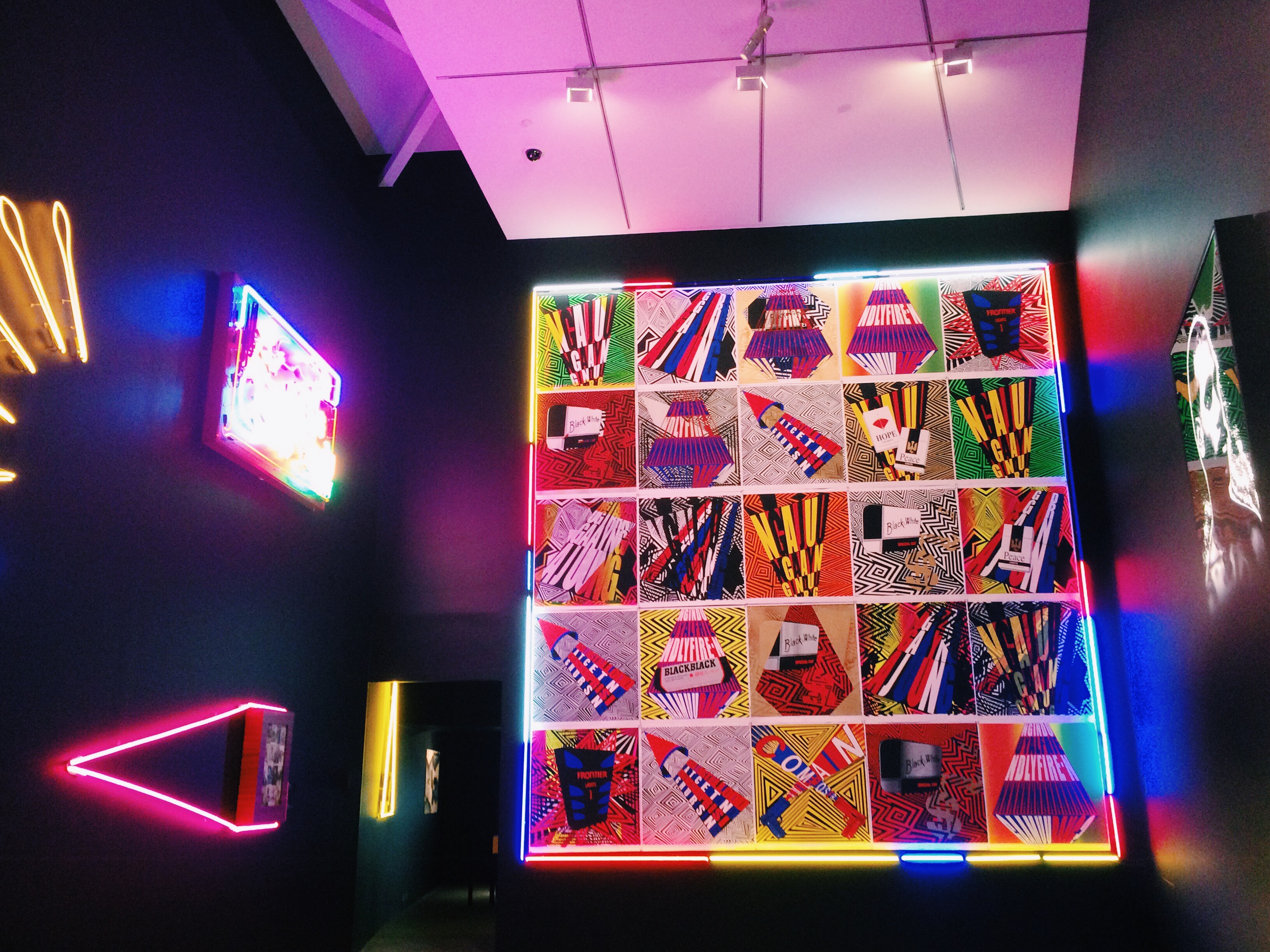 A series of ethnographic portraits sit on easels lined up in the middle of the second gallery; the faces of First Nations Peoples from around the world stare out at you, the visitor.

The figures in the portraits are returning the gaze; they seem to be looking at you, looking at them. One is made hyper-aware of this act of looking – of being implicated within the colonial gaze itself. In this way, Andrew is inviting us to reconsider our own structures of understanding, our own practices of observation and interpretation. The exhibition forces us to examine our own position in relation to colonial history. 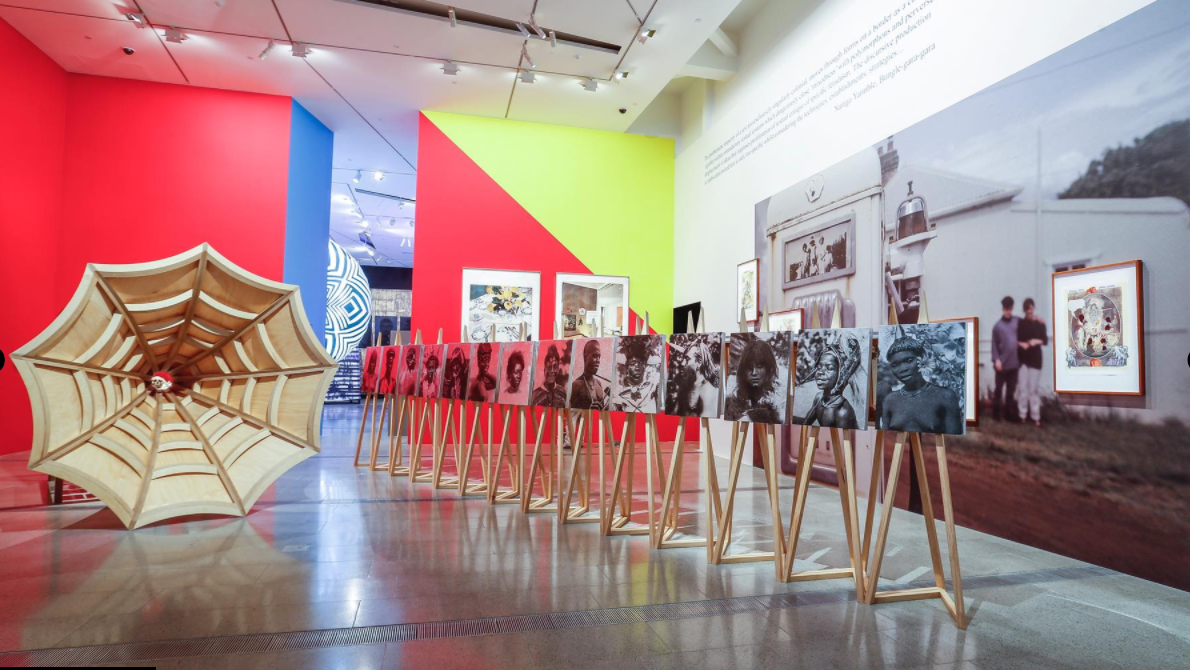 In his art practice, Brook Andrew examines how the legacy of historical trauma is manifested in the present, reframing historical narratives and interrogating our collective cultural inheritance.

Andrew invites us to consider alternative ways of inhabiting and interpreting the world; of viewing the past, the present, the future. He merges and layers archives, images, and references in a non-linear fashion, weaving and suggesting alternative narratives than the dominant one we receive. The teleological ordering of knowledge, of history, and of peoples into distinct categorizations is a European colonial construct; Andrew challenges and subverts this mode of presenting the past. The Right To Offend Is Sacred demands engagement; it’s an exhibition that needs to be felt, experienced, and seen, in all it’s multisensory glory. 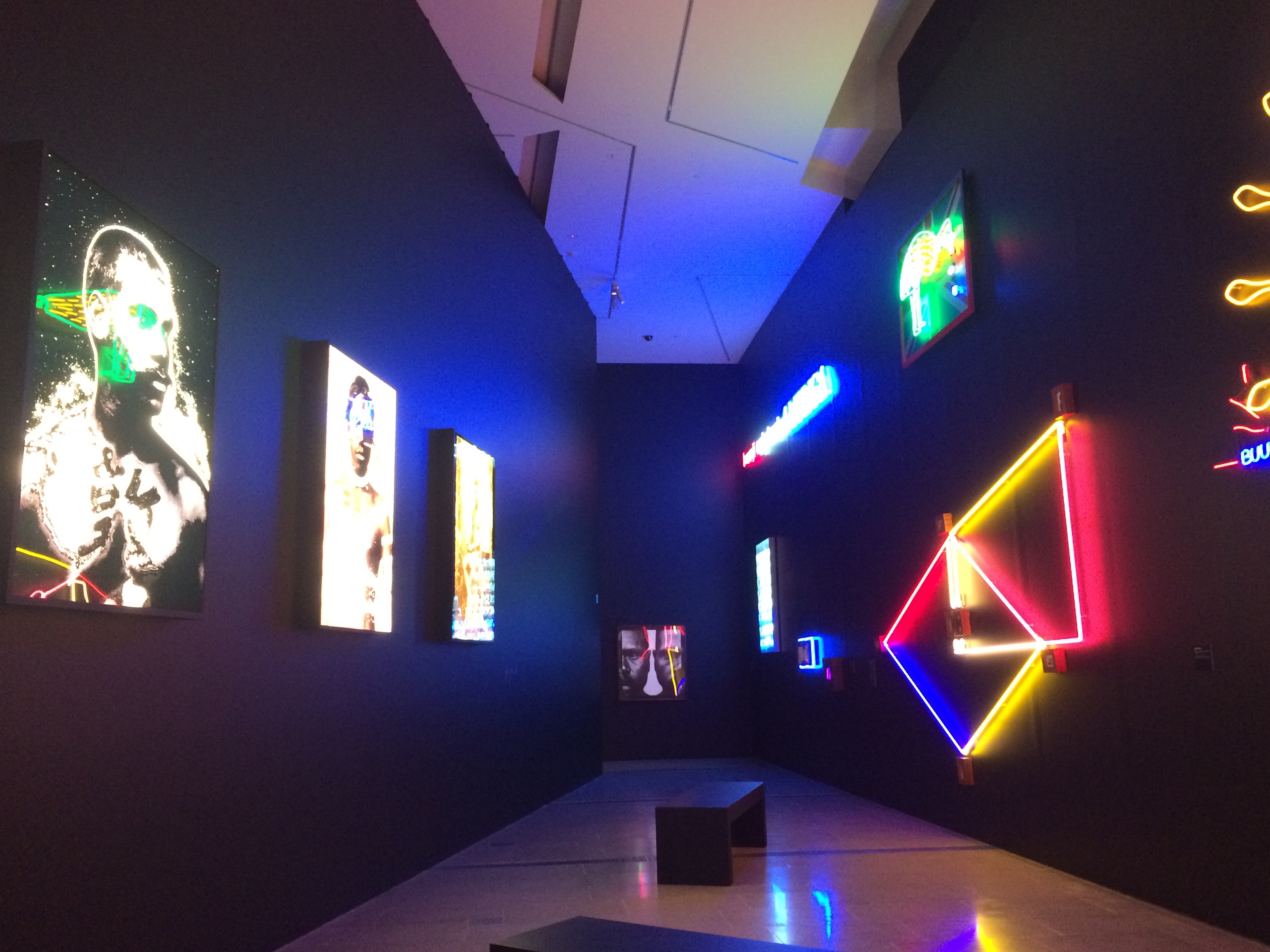 Before Where, Perhaps What?