Crooked Colours released their sophomore album, Langata, just over a week ago. And judging by the crowds’ response on Sunday night at The Forum theatre – it has been received very, very well.

Over the past few weeks, the Perth indie-electronic trio consisting of members Philip Slabber, Leon De Baughn, and Liam Merrett-Park, have played shows as far down south as Hobart, and then headed west to Fremantle, followed by Brisbane, Coolangatta, Sydney, and now completing their Melbourne run of shows, with their Saturday night being sold out. Although last night didn’t sell out, there wasn’t a spare spot on the dance floor. With support acts The Doors, Kayex, and Nyxen electrifying the crowd, the stage was well and truly warmed for Crooked Colours. The lights were dimmed, and the crowd cheered as the trio came on stage and the first sounds of synth and steel drums began. 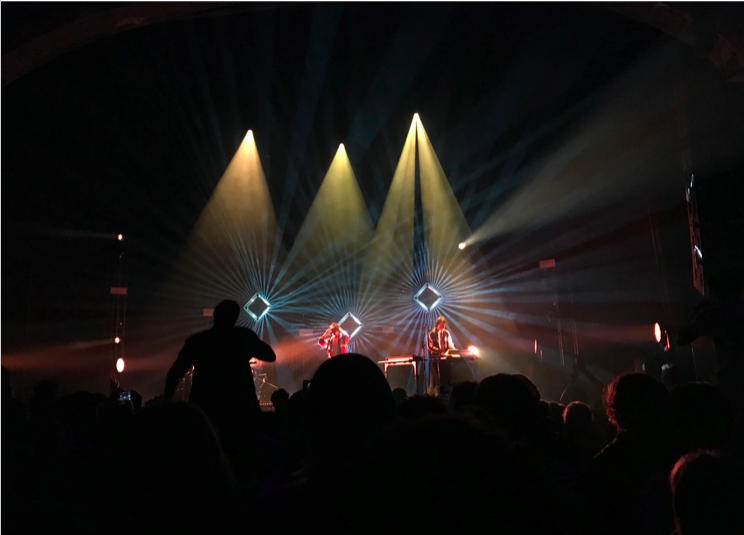 Kicking off with Come Back to You, a 2017 classic from their debut album Vera, the crowd instantly knew the song and sang the lyrics in unison, greeting the trio with dancing in the form of bopping following closely behind. With the crowd in an excitable yet relaxed mood, due to the groups’ sensational ambiance, the boys played Just Breathe, off of their new album Langata, which set the tone for the rest of the night. Heart String was up next, reinforcing the trio’s signature indie-electronic sound. Crooked Colours had the crowd in a constant electronica groove, with breaks no longer than 10 seconds between each song. After playing an eclectic mix of dance beats, a cover was in store, and the boys said to the crowd they were going to bring back a Triple J Like a Version cover. Crooked Colours played their rendition of Baby Bash’s Suga Suga, and for those who haven’t heard the song before, Suga Suga was an early 00’s rap song mixed with a pop chorus. Yep, as you can visualise, the crowd erupted in elation and body rolls.

Their musical talents weren’t the only element en pointe that night, as the light show was nothing short of spectacular. Deep hues of red, blue, and green cut through the atmosphere, with diamond shapes being a motif of the night, ultimately sending the audience into a trance. On their album Langata, there are quiet moments where the album plateaus, however, the live show did not once plateau, nor quieten. The vibrations were felt quite literally throughout the entirety of the show, the bodies of the people on the dance floor being the recipients. In addition to the physical vibrations being felt, the crowd’s eyes soon lifted to fireworks which were streaming out of the stage. Towards the end of the set, the trios arguably most popular song, Do it Like You, was played. This was the biggest dance hit of the night, as even people who were sitting down rose from their seats and began to dance. The set was the perfect length, with people dancing in anticipation at the end of every song. As the show came to a close, the audience cheered and stomped their feet in unison, yelling, “one more song, one more song!”. Unfortunately for the crowd, the trio did not make an encore. However, it was not needed after the sheer amount of energy put into the show by all three members of Crooked Colours. If you can, try and see Crooked Colours on their tour – you will not be disappointed, and you’ll be left begging for more.

Where you can catch the rest of Crooked Colours on their Australian tour:

Or head to crookedcoloursmusic.com for more info.

The Realm, or How I Learned to Stop Worrying, and Love the Politics