Falsettos is a complex and layered musical that explores themes of sexual identity, family
relationships, coming of age and terminal illness. It is well renowned in the world of music
theatre as one of the first musicals to deal with the AIDS epidemic of 1981 and to normalise
gay relationships. At the heart of the script, though, it is not a musical about the tragedy of
AIDS or even about being queer. Falsettos is about how life’s rapid changes of direction
challenge our expectations and perceptions of who we are.

On top of all of this complex subject matter, the book by William Finn and James Lapine also
plays with unconventional plot development and experiments in narrative. The story mixes
real life with scenes that take place inside a character’s anxious internal psyche, challenging
audiences to determine from whose perspective we are observing the action at any time.

Indeed, StageArt have taken on a complicated and unrelenting piece of theatre that is
deeply beloved by many in the musical theatre community. Overall, director Tyran Parke
makes an engaging combination of bold and simple choices, and the cast are each
outstanding singers who carry the demanding score with confidence and refinement.

The set, designed by Daniel Harvey, uses a chess board as flooring and the New York City
skyline as a backdrop. The game of chess is a motif throughout the play, with Jason being a
reclusive young chess enthusiast who finds solace in the simplicity of the game compared to
his chaotic family relationships. It also serves a metaphor for the convoluted evolution of
life, in which characters often think they are moving in one direction and are suddenly
thrown off by a change in the game. The skyline, however, feels like an obvious and
thoughtless solution to the issue of needing an unobtrusive and transformable backdrop.
The New York setting is clearly established through the text and does not need to be
constantly reinforced as the themes of the musical could apply to a variety of contexts. 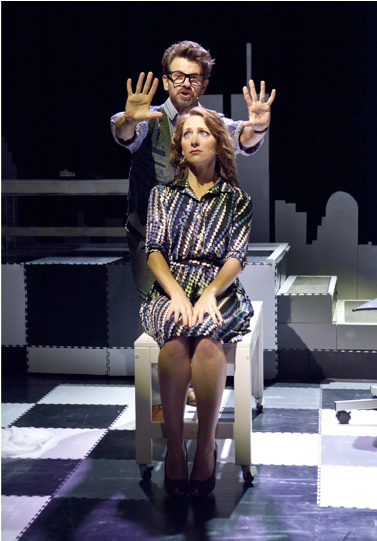 Sarah Shahinian, who is returning to the stage after a five-year hiatus, is the stand out actor of thecast. Her performance as Trina, a functioning addict who works tirelessly to maintain appearances of ‘a tight-knit’ middle-class family is compelling and honest in its mix of comedy and desperation.
Fourteen year old Ben Jason-Easton also delivers an extraordinarily mature performance as the child of a complicated divorce, who is apprehensively approaching his Bar Mitzvah and trying to appease his family in conflict. Easton’s relaxed stage presence and convincing performance is highly commendable.

The three (adult) male leads are all exceptional singers. However, the relationship between Marvin (Don Winson) and Whizzer (Sam Ward), which is supposed to be so rich with sexual energy that it drives Marvin to break up his marriage and sacrifice his dream of a conventional family, is lacking in chemistry and ultimately unconvincing until the final stages of the second act.

A three-dimensional, un-clichéd portrayal of LGBTIQ+ characters is an essential part of what makes Falsettos such an important musical for many in the music theatre community. In each of the queer characters’ storylines, homosexuality is a secondary characteristic to a plethora of other personality traits. Marvin is a father, an alpha-male and a businessman who questions his sexuality. Charlotte (Francesca Arena) is a brilliant doctor who is also a lesbian, and Cordelia (Jenni Little) is a chef with an overbearing personality who happens to be a lesbian too. It is this humanity that makes Falsettos feel so truthful and ahead of its time.

In Parke’s production, however, the character of Whizzer is portrayed as a homosexual with very little else going on. In the second act we find out he likes baseball and is a fairly keen athlete, though this seems like a plot device that is primarily used to reveal his depleting physical strength when we later discover that he has contracted a horrific illness. Sam Ward is undeniably an excellent singer, but his portrayal of Whizzer feels more like the shallow representations of homosexuals that we are used to seeing in films from the 80s and 90s, and stands in contrast to the nuanced portrayal of the other gay characters in the ensemble. It is worth noting, though, that the writing of Whizzer as a character likely feels dated now to a 2018 audience due to the overuse of this particular brand of gay stereotype in film and television from past decades, and may have seemed like a more relevant depiction of a proud openly gay man when Falsettos originally opened in 1992.

Two of the most powerful moments of the production are the anxiety-inducing performance of ‘March of the Falsettos’ and the unfolding of Charlotte’s realisation about the severity of the HIV/AIDS infection that is killing many of her patients. Parke uses moments of genius surrealism with puppetry and toy-like instruments to symbolise the scenes of insight into Trina’s nervous breakdown, and there are several brilliant moments of aside from Jason Easton that poignantly capture the anxiety of going through puberty.

Ultimately, the production uses an incredibly affective combination of frenetic pace, sound
and staging to capture the central themes of quiet restlessness in inner-city, middle class
social life and the anxiety of feeling like one’s perceived identity falling apart. Overall, the
musical direction and stellar performances from many makes for a praiseworthy show that
is essential viewing for music theatre fans.

Falsettos plays at Chapel off Chapel until the 11th of February.

Joining MUST is a must!