The opinions expressed in the piece are not necessarily representative of the Lot’s Wife committee. Austin is on the editorial board and was subject to the same impartial editing procedures as any other author. Austin is an ordinary member of the Victorian Greens. 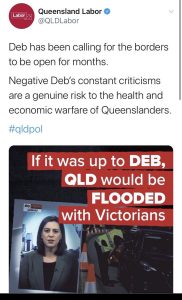 Amid this month’s ongoing pandemic, battles for racial justice, and the release of Indian Matchmaking on Netflix, you would be forgiven for missing the following tweet: “If it was up to Deb, QLD would be FLOODED with Victorians”. Big and bold wording, strong borders rhetoric, comparing a group of human beings to a natural disaster… I know what you’re thinking: Pauline Hanson really has run out of minorities to hate. But you would be mistaken, because this now-deleted tweet came from none other than Queensland Labor.

Indeed, the State Government has firmly maintained its hard border closure and has attacked any suggestion from the Liberal National Party (LNP) opposition – led by Deborah Frecklington – that residents of other states should be allowed into Queensland.

Over the last month, Premier Palaszczuk has doubled down on the tribalist rhetoric that typifies border politics, stating several times that the Government will “put Queenslanders first”. Queenslanders first? Peculiar choice of words – words like that are usually uttered by people with bright orange skin and tiny hands.

You may be wondering why Labor would use bizarrely inflammatory rhetoric about Victorians (I can already picture the obnoxious white lefties on Twitter saying they “like, understand how the refugees feel now”). While I won’t deny COVID-19 is a legitimate reason to stamp out inter-state travel – we are basically a leper colony down here – there is another, underlying reason: Queensland Labor faces an election in October, and border talk is a certified vote-winner. It worked for Abbott (“Stop the Boats”), it worked for Trump (“Build the Wall”), and judging by the high approval rating for Queensland’s pandemic response, it may just work for Palaszczuk too.

This may explain Treasurer Cameron Dick’s deliberate statement that “Queenslanders will choose who comes to Queensland and the circumstances in which they come”. If these words sound familiar, it is because they emulate John Howard’s famous 2001 election speech concerning the Tampa affair, wherein Howard declared refugees did not have an inherent right to enter the country (International law? Never heard of it). Falsely accusing boat-arriving refugees of throwing their children overboard and jumping a very-imaginary “queue”, the Howard Government successfully united Australians against a perceived common threat. Howard’s “circumstances” speech was instantly iconic, and has been echoed many times over the years by Liberal figures. The stance also reversed the LNP’s electoral chances and spring-boarded Howard to re-election. It remains to be seen if Palaszczuk’s gambit can achieve the same outcome with Victorians as the common threat – after all, the only “queues” we want to jump are the ones at Dreamworld.

So, why do border politics make for electoral-catnip? It may have something to do with International Relations theorist Ole Wæver’s theory of “Securitisation”. Securitisation refers to the process of politicising a topic such that it is not merely viewed as an immigration or social issue, but rather a matter of “national security” (e.g. the “War on Drugs”). National security issues, in turn, increase public approval, as they create an overarching danger to unite against. They also allow governments to deploy jingoistic tropes and appear stereotypically “strong” in the face of a crisis. The common orthodoxy is that wartime leaders tend to win approval, so treating border crossings as a war-like threat is a politically savvy move.

Despite this, Labor has never been able to partake in this vote-winning exercise. This is partly because the left-wing faction of the party typically resists rhetoric vilifying refugees. Even a compromising position by then-Labor leader Kim Beazley in 2001, wherein he initially accepted Howard’s response to the Tampa affair, is often cited by Greens figures as a key motivation for joining the third party.

However, because Queensland Labor is closing borders to Victorians and not highly vulnerable refugees, they don’t have to worry about such a left-wing backlash. This essentially allows Labor to attack the LNP for being “soft on borders” for the first time since 1977, when Gough Whitlam coined the term “queue jumpers” and accused Prime Minister Fraser of preferencing Vietnamese refugees over so-called “deserving” migrants (it may surprise lefties to learn that Gough Whitlam was not, in fact, the reincarnation of Jesus Christ).

In light of this, you can bet Palaszczuk is upset her government didn’t get to handle the Ruby Princess cruise. If their border comments are any indicator, they would have relished the chance to run a “STOP THE BOATS” campaign. Although I wonder if Tony Abbott’s infamous slogan would work as effectively against overfed boomers on cruise ships, or Brunswick hipsters sailing Greta Thunberg-esque eco-yachts.

Another advantage of securitising areas such as border regulation is that a “national security” crisis diverts attention away from politically inconvenient issues. When pushed on domestic failings, the government in question can simply say there are bigger fish to fry, and that they cannot afford to be distracted. This may explain why Palaszczuk wants the hard border to dominate the headlines: it distracts the public from climate change. In case you’ve been living under a rock for the last few years, the Adani coal mine in Queensland has been a little controversial, and Palaszczuk cannot go anywhere without an angry mob of stop-sign-waving eco-warriors haranguing her. The bleaching of the Great Barrier Reef is another hot-topic that has riled Queenslanders (you can read Patrick Lobo’s excellent overview of that topic in Lot’s Wife Edition 3, here). By foregrounding the battle against COVID-19, Palaszczuk may keep Adani off the agenda and stem any bleeding of support to the Greens. She can also avoid publicly appearing unsure on the issue, as that would give the LNP the ammunition they need to accuse her of “preferencing latte-sipping hippies over Aussie battlers” or something to that effect. So yes, Labor’s calculated rhetoric regarding the hard border is politically advantageous on multiple fronts.

Churchill once said that a politician should “never let a good crisis go to waste”, and Palaszczuk’s strategic inversion of anti-refugee rhetoric seems to be working, with a majority of Queenslanders appearing to support the hard border. Of course, the popularity of the border closure is dependent on it working, and recent outbreaks in Queensland may threaten the Government’s tactics. In any case, the sheer political strategy at play should be admired. If the LNP cannot summon some clever tactics of their own, their chances of winning are about as dead as the Great Barrier Reef.