For the first time in decades, religious leaders and scientific experts from across the globe joined forces to warn the human population of what was to come. The news was live on every channel. Press conferences had been called. An announcement was to come.

Dr. Yinga Bulava Johnson was the first to step up to the podium, her image streamed live to every electronic device with a proper signal. Sweating profusely, she attempted to clear her throat and address the audience of billions.

“We have come together today because the signs are clear. They are coming back, and we need to prepare.”

The doctor looked down at the podium, perhaps at a set of notes instructing her on how to stay calm while the world was watching.

“It has been prophesied and scientifically confirmed that now, here, in 2020, conditions are perfect for the re-emergence of…”

Dr Johnson took a sip of water, shuffled her feet a little, and then appeared to gain more confidence, as if remembering a Ted Talk on public speaking and body language. She stood up straight, lifted her head and stared straight down the lens of the camera in front of her.

The audience was silent.

“Unicorns are coming back. The signs are clear – we are certain that they are returning, and if they find us unworthy, we will have to vacate the planet.”

Unfortunately, we humans are idiots, and the warnings were not taken seriously. Many people saw the whole situation as a humorous affair, unconvinced by the expert’s conviction. Twitter went wild for a day or two… 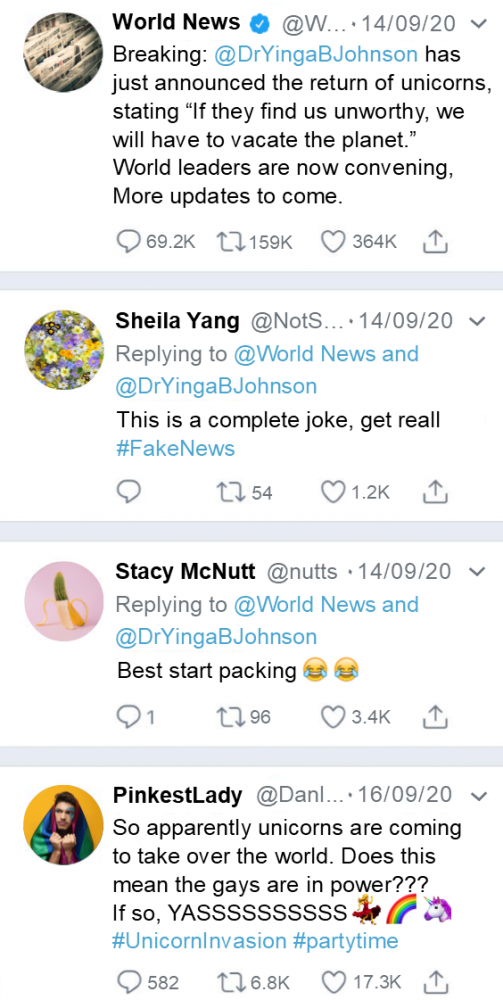 But most people moved on.

And now, here we are.

It is the year 2021. My name is Sadie Nguyen. And tomorrow, my maybe-sort-of-girlfriend and I are going to war.

As predicted and foretold, the Unicorns did come back. At first there was one, then two, then thousands.

Humans were given an ultimatum: either join the Unicorn Alliance and live a life of peace and happiness – or be destroyed.

Many decided that it is was in their best interests to be destroyed. If a human exhibited behaviour in opposition to the promotion of peace and happiness for all, then their decision had been made.

That’s where Mia and I come in. We are Pastel Officers of the 74th Unicorn Brigade. Under General Pink Steel, one of the most feared Unicorns known to untamed Humans, we fight for peace!

After graduating from high school, I knew exactly what I wanted to do. I enrolled into Unicorps, a specialised training program for humans wanting to bring joy to their life and help the Unicorn effort. Six months of training later, I was ready for the frontline. I met Mia in hand-to-hand combat, where we were made sparring partners. She kicked me, I punched her. It was true love. We became the best fighters in our class, training whenever we had free time. For the first time in a long time, I truly felt like I belonged.

Mia and I graduated two months ago. Since then, we have been working out of Flinders Street station, trying to keep the peace. Mostly, we just sit around, fetching the General his dairy-free fairy floss lattes and putting up Unicorn Alliance posters. It’s dull, but Mia and I spend most of the time flirting and making out, so it’s not as dull as it could be.

Most people didn’t start hearing about the reappearance of Unicorns until after the fall of the United States of America. The world’s governments had largely tried to keep any evidence of Unicorns under wraps. And when their numbers were still in the tens and hundreds, this was easily achieved. 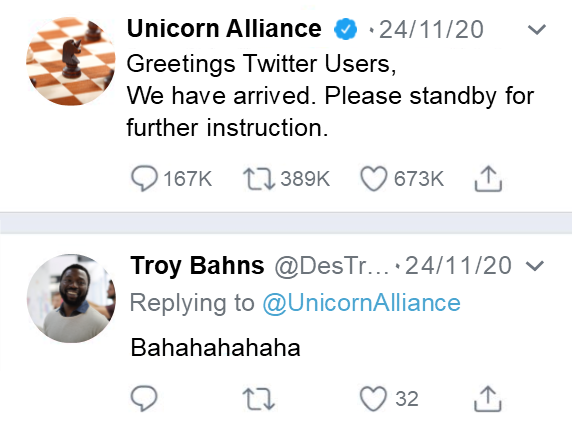 The U.S. had been sequestering Unicorns at a government black site known as “Pony Tail Drop Go”. But on the 24th of November, 2020, thousands – potentially millions – of Unicorns spontaneously emerged across America. A short-lived state of emergency was called, and by the 25th of November, the Unicorns were in power and governing. The White House became a glittery mint-green colour, and the region was renamed Unicorn Shiny Area, retaining the original U.S.A. initials.

After that, the rest of the world finally woke up to the realisation that the Unicorns had indeed returned.

In Australia, news from Unicorn Shiny Area spread quickly. Our politicians spoke out about the “Unicorn Invasion” and attempted to ally themselves with other human-governed countries to fight the “takeover”. This rhetoric lasted twelve hours. Our Prime Minster changed three times, until eventually the Unicorns were in power here, too.

We are now Golden Sun Unicorn Country. The rest of the world has been conquered, and we are just trying to clean up the mess. Making the world pretty again.