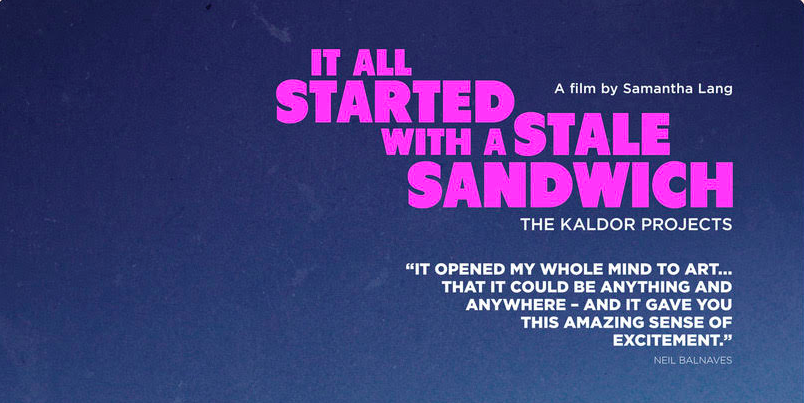 Documentary, especially biographical documentary, primarily revolves around the depiction of past events so that inferences about them can be made and therefore actions can be taken in the future. It All Started with A Stale Sandwich takes the art form of the documentary and applies it in its purest form to the life of John Kaldor. John Kaldor himself is a genius within the Australian art world, similar to David Stratton in the film world, Kaldor exposed Australia to artworks rarely if ever seen before. Through his fifty-year career he has created 34 public exhibitions and in doing these 34 public art pieces has exposed not only Australia but also the world to artists that may have not necessarily reached the ears of the general public. John Kalder is an artist, a businessman, an immigrant but most importantly he is a teacher. A teacher that throughout his life has seen, learned and acted to create an Australian art culture that might not have existed as prominently if it weren’t for him.

Documentary as the word suggests documents and presents information and stories to people. In a very similar way, John Kaldor is a documentarian of art, however, instead of using the screen as his medium, he invites people to exhibit themselves. From his initial introduction of Christo to Australia to his latest public exhibition and retrospective presentation, Kaldor takes the new and unique and exposes it for people to see. This approach is emulated in the documentary itself in the way that it utilises every aspect of the vintage archives that they had. Indeed, one of the most interesting presentations revolved around Moorman and Paik, a public art exhibit that centred around the performance art and artwork of Charlotte Moorman and Nam June Paik. Footage and images present what seemed to be far more lax times in the public conscious where a woman could be suspended in the air by balloons and play the cello or could have small televisions strapped to her chest while doing the same thing. The documentary pairs the goings-on of the public exhibition periods with insights of artists very well and initiates a form of reflection on times past and more notably arts past, arts that were so prominent in the life of Kandor himself.

It is the documentation of an event that precedes the reflection upon said occurrences. Through the mixture of interviews and moments in Kandor’s latest projects, Samantha Lang does express how Kaldor’s life has changed and grown over the years. The use of multiple screens that note periods of Kaldor’s life in the form of his works emphasises these changes in the psyche. Always being one to push the boundaries, Kaldor moves onto depicting the work of Marina Abramovic and Xavier Le Roy within Australia. At the same time structurally the film itself begins to take a more modern approach to the way it tackles those times in Kaldor’s life. Interviewing people involved more readily such as participants in the works and breaking the ideas behind the works, leaves inflections that dissect the art that Kaldor had exhibited. It also creates an inference into how Kaldor’s psyche had changed to adopt more experimental art forms and create a greater awareness for more unique art. In doing so, both the film and Kaldor try to help the Australian public (as well as the public in general) understand the importance of different forms of art concerning contemporary types. In a way Kaldor acts as the eyes for the Australian art community by presenting to the public works of art that had rarely if ever been seen before, this includes the work of Koons and other artists. Lang takes Kaldor’s mentality and creates a unique vision into the reflective and active nature of the man himself.

Finally, the film transitions, like the rationale behind documentaries, into a stage of action. Kaldor like the film turned his eye back onto Australia and depicting Australian artists. The documentary parallels this by looking into indigenous culture and offering a brief history lesson to accommodate the later public art pieces that Kaldor organised. Using barrangal dyara, Kaldor expresses the voice of the indigenous people of Australia through the voice of Johnathan Jones. The film acts upon this to establish an understanding tone that suitably shifts into the final stages of Kaldor’s retrospective preparation and a look into the future of his work.

It All Started with A Stale Sandwich depicts the life of a man who lived his life to exhibit art to a public unaware of contemporary art. In the same loving way Kaldor exposed Australia to the art of the world, Samantha Lang takes us on a journey to understand the life of a man so influential the creative culture of Australia. It All Started with A Stale Sandwich unveils Kaldor, a man whose life was just as amazing as the oeuvre of work that he created during it.

Review — Once Upon A Time in Hollywood