“It’s funny how precise you have to be to give the ‘appearance of chaos'”: Noises Off’s James Saunders

Michael Frayn’s Noises Off has consistently been labelled the funniest play ever since it was written in 1982. The Guardian went so far as to call it “the play so funny it makes people ill.” A farce from beginning to end; Noises Off showcases the ineptitude, foolhardiness and narcissism of a mediocre theatre company which stumbles, crashes and falls through its rehearsals and performances. It is a play that puts a totally different spin on the theatre, which is typically characterised as a meticulous, professional environment.

Noises Off is coming to Melbourne with a cast featuring Simon Burke, Emily Goddard, James Saunders, Libby Munro and Ray Chong Nee. We were lucky enough to catch up with James, who plays Tim Allgood: an unassuming nice guy who puts up with the error-prone nature of the production.

James is a talented Australian actor who has spades of stage and screen experience: appearing in productions of Richard III, The Death of Ivan Illych and Don Juan in Soho; TV programs such as Neighbours, Offspring and Wilfred; and David Michôd’s incredibly successful film, Animal Kingdom.

His experience in Noises Off, thus far, has been a roller-coaster. And that doesn’t seem likely to change very soon. 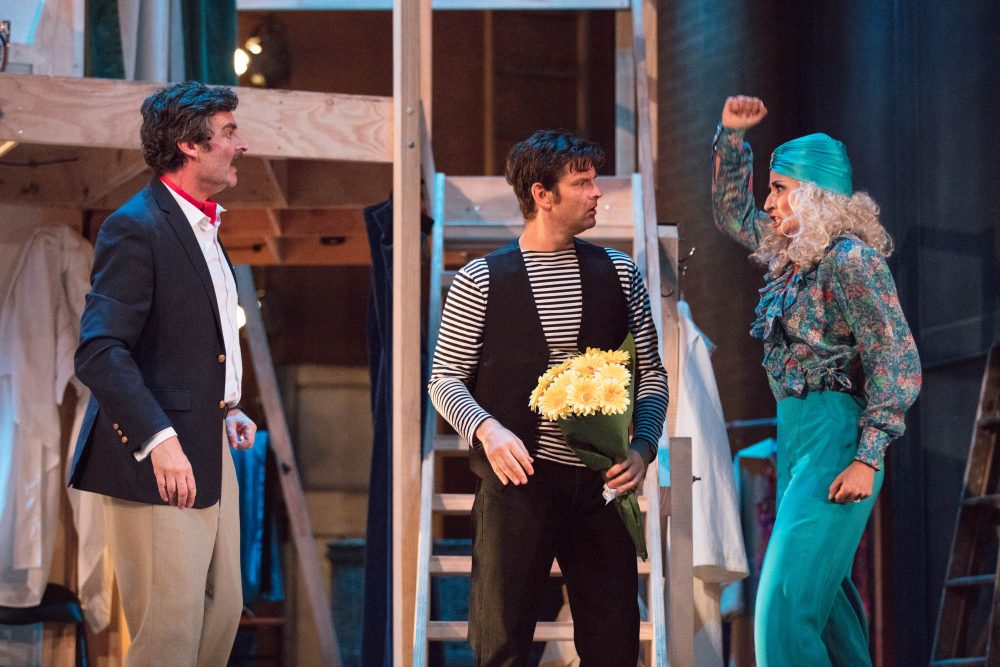 Has Noises Off been one of the craziest, most exciting stage/acting experiences you’ve had in your career? On account of all the mishaps, complications and clumsiness that runs riot in the play.

For sure. It’s certainly a very exciting show to do. It’s different every night. I’d heard many stories about life imitating art in other productions, and that has been true. Act 3 in particular has a life of its own and I am often the one trying to keep things on track. On the other hand, it’s funny just how precise and well drilled you have to be to give the ‘appearance’ of chaos. It’s exhausting in that sense.

Is there any truth to the play’s depiction of the theatre world? Have you had any real experiences in your career that bear some kind of resemblance to the events in Noises Off? Or is the play just a ridiculously enjoyable farce?

I’d say that it’s set out to be a ridiculously enjoyable farce, but the ideas had to come from somewhere, right? And some of the stories that have come up from the cast about experiences we’ve all had paint a very bleak picture of the theatre world. So yes, I think there is truth to some of it, although the play takes them to extremes. I thinks some of us have had experiences of cast members not speaking to each other, cast affairs, sabotage etc. but the sheer unpreparedness for opening night that is explored in Act 1 is something I think we’ve all had! It’s terrifying!

In Noises Off, you play Tim Allgood, who does a bit of everything: he’s the stage manager, he’s an understudy, he repairs the set, and is often tasked with performing errands for Lloyd. If nothing else, your experience in Noises Off must be keeping you in good shape?

It’s an exhausting show. And yes, the company physio is probably regretting being part of it. I think a great moment for me was in Act 3 during a performance in Brisbane. The telephone broke at the beginning of the Act and it’s a vital prop for many gags throughout the rest of the show. Given my role as Tim, I had to make an executive decision; crawl on stage and repair the phone mid-scene, as any good Stage manager/ASM would do using on the tools I had on me at the time. Basically, I was MacGyver. Our real Stage manager and ASM (in the wings) applauded me when I came off, proud as punch of what I’d become. I’d crossed over successfully.

What do you think of your character’s place in Noises Off? I think, as an audience, we probably relate to Tim the most, because he is usually the one trying to hold everything together.

Yes, I hope so. I think the idea of ‘flawed people trying their best under difficult circumstances’ is taken to absolute extremes in the play. That’s what makes it so funny, and I hope that watching someone try their best when all around them is falling apart is something that people respond to, ‘cause it’s the trying that’s important. I grew up watching great English comedies, in particular Fawlty Towers and there is nothing more excruciatingly funny than watching Basil try to fix the problems he’s caused. So Tim’s place in the show is vital as a reference point I think; at least he’s trying and it’s coming from a heartfelt place. 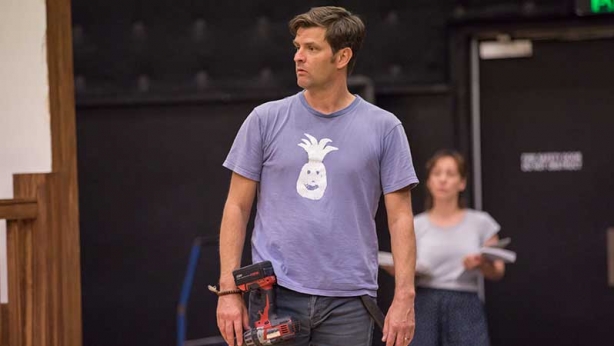 Like a lot of comedy, Noises Off is very reliant on timing. What did you find was the right balance between acting on your own instincts, and accepting the advice of Sam Strong and the other creatives?

It’s a vital balance to strike and a lot of the last two weeks of rehearsal was stripping back some of the funny gags that we’d created in order to respect the timings inherent in the script. The play has been meticulously written and sometimes even the smallest addition throws it out of whack, so always going back to the script has been very important. Sam [Strong] and Leith [McPherson] would always have a very keen eye on all of that to ensure that the genius in the writing is allowed to shine through. Sometimes you just have to get out of the way. But I’m working with some incredibly funny people, who just instinctively know what works and what might work better, so the rehearsal process was amazing to go through. And we are still tinkering with bits.

Do you find that your approach to a role is much different when you are performing in a comical production, compared to an out-and-out drama?

No, it’s the same. The truth of the situation and striving for authenticity in each moment is just as important in comedy as in drama. The writing, characters and situations do the heavy lifting for you in terms of the comedy. As you rehearse and make choices, discover things etc. we rely on the directors and creatives to work out what to keep and what to throw out, which then informs the next choices we make.

Although there are a few differences, in that you don’t hear many directors of Hamlet saying before a scene, ‘I don’t know, let’s try a few different versions and we’ll pick whichever is funniest!’

What do you want audiences to take away from this production of Noises Off? 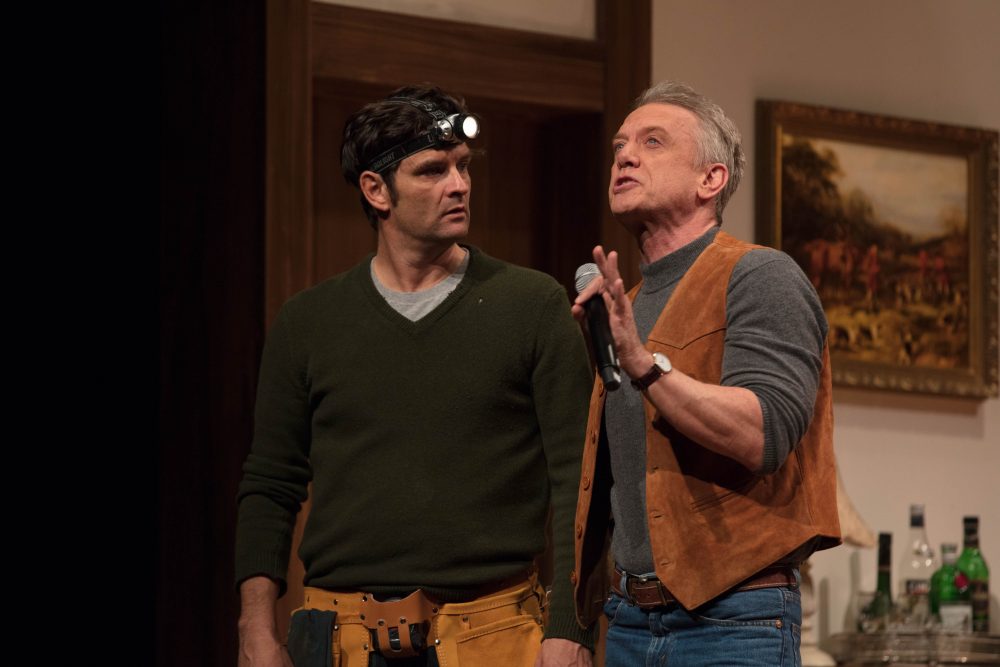 Noises Off is showing at the Arts Centre from 12 July—12 August. Tickets can be purchased at: http://www.mtc.com.au/plays-and-tickets/season-2017/noises-off/