Noises Off review: an unstoppable force of unbridled hilarity

No theatre production or performance can be conceived and executed perfectly. It is beyond the scope of our human capabilities. Some productions will have hiccups, others are plagued by persistent crisis. But surely no production has gone amiss like the one in Michael Frayn’s Noises Off, where everything that could go wrong (you guessed it), does go wrong. And for us, it could not be funnier.

Noises Off is a play within a play. We first meet the touring theatre company in a dress rehearsal for their play, called ‘Nothing On’. It is all a bit of a shambles, as Dotty (Louise Siversen) can’t remember when to take a plate of sardines off stage, Frederick’s (Hugh Parker) wife has just left him, and Brooke’s (Libby Munro) contact lenses keep falling out. The director of ‘Nothing On’, Lloyd (Simon Burke) – who regularly reminds his cast he has directed Richard III ­– is resigned to the prospect of failure.

If that sounds disorganised, then what follows descends into total chaos. Months into the tour, things become more disjointed, more disastrous by the performance (which I won’t spoil).

This is a sharp and refined production of a seminal farce. The cast and creatives – most notably director Sam Strong – have captured every nugget, mined every crater, of Frayn’s inimitable script. Doors slam, people trip, and noses bleed all to the distinctive tune of the script’s stage directions. There are even a few touches added to this production, such as some unfortunate placings of champagne bottles and abnormally large pepper grinders.

Richard Roberts’ set fits the mould of a typical Noises Off set, with an ordinary, comfortable varnish that completely belies the accidents, mishaps, and buffoonery that is to transpire within its very walls. Roberts’ costume design is similarly accomplished; as all the characters are dressed in markedly different colours, as if to suggest the presence of these wacky individuals in one location would inevitably lead to catastrophe.

Acting in Noises Off, I imagine, would be both thrillingly fun and demanding.  Even though you’d be acting out ridiculous things, the manic and meticulous nature of the timings of the play require great attention to physical and temporal detail. The cast of this production, in equal measure, masterly balance the inflexibility of rehearsed, tried performance with infectious energy that can only be harnessed in front of an audience. Indeed, everyone in the cast – from Burke, to Munro, to Ray Chong Nee (who plays Garry), to James Saunders (who plays Tim Allgood) – deserve applause (and they get it)for their spot-on performances.

Possibly the most memorable performance is delivered by Steven Tandy, who plays old-timer Selsdon Mowbray. Though with the slenderest stage-time, Tandy makes the most of every second he is on stage; exclaiming, mishearing, drinking and sauntering across stage as the tired and forgetful Mowbray. It might be worth mention that Mowbray commands some of the best lines in the play (‘No bars, no burglar alarm. They ought to be prosecuted for incitement’).

You’d be pressed to find a play as amusing, hysterical and humorous as Noises Off. As such, it is no small feat that this production capitalises on every possible farcical moment (unlike their in-play characters). I have never heard such shrieks of laughter in my 20 years of living as I did at Noises Off, let alone in the pompous, proper world of the theatre. 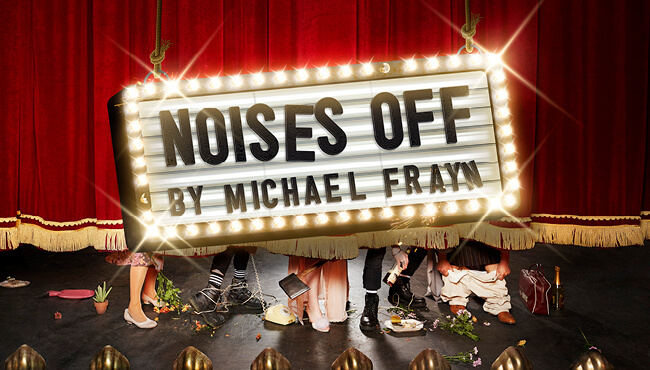 Noises Off is showing at the Arts Centre until 12 August. Tickets can be purchased at: http://www.mtc.com.au/plays-and-tickets/season-2017/noises-off/