Review: Godot: The Wait is Over

As the title suggests, Godot: The Wait is Over is an ambitious sequel 65 years after Beckett’s inimitable Waiting for Godot. In light of this, the play tries to do the impossible: adding to, and remaking, the absurdist masterpiece. Playwright Ian Robinson’s script is obviously a love letter; as much is said in the program. But it also stands on its own two legs as a rich dramatic work.

As soon as the lights go up (as the La Mama courthouse theatre doesn’t have a curtain), it’s clear the play will not attempt to revolutionise Gogo (Cherian Jacob) and Didi’s (Ezekiel Day) tale – a smart move. The Beckettian hallmarks are all present: the minimalist, sparse set; the fractured, confounding linguistic flourish; and the destitute Gogo and Didi, who wait patiently for Godot anew. Except this time, Godot comes.

Godot’s appearance is one of the most anticipated arrivals in all of theatre. In Waiting for Godot, like God himself, Godot is never to be seen. Though Godot (Rebecca Morton) materialises here, one cannot help but feel letdown. Where Beckett postulated that God is an elusive, likely non-existent figure, Robinson posits that God isn’t the benevolent figure He is purported to be. Or perhaps it is something different, that God has been replaced by the all-consuming relationship we have to technology; oppressing us and stultifying our humanness. Godot struts imperiously across the stage, ordering and controlling Gogo and Didi’s behaviour. They pathetically obey his every command. When Godot says stand, they stand. When Godot says sit, they sit.

As with all of theatre, absurdist productions depend especially on good performances, for timing, communication of ideas, and chemistry can define the quality of a play. Ezekiel Day, and Cherian Jacob are excellent as Didi and Gogo respectively. Their contrasting approach to the characters – Day is dim-witted, foolish, and Jacob unanchored and hysterical – produces a dramatic dynamism that is hard to come by in Melbourne theatre. Their performances are probably the thing that’ll remain with you once the play has concluded. Rebecca Morton and Suhasini Seelin both deliver versatile performances in multi-character roles, haphazardly appearing across the course of the play. Morton’s performance as Godot, is particularly assured, and it seems she takes great pleasure in playing Godot as maliciously authoritarian.

Certainly, the title Godot: The Wait is Over might be a modicum melodramatic. It is fair to say there hasn’t been a frenzied anticipation for a sequel to Beckett’s original. The whole idea of Waiting for Godot was that the wait would never conclude. Robinson has contrarily decided that the wait must end, and from which a tight, fascinating play has been born.

Godot: The Wait is Over is at the La Mama Theatre until September 17. 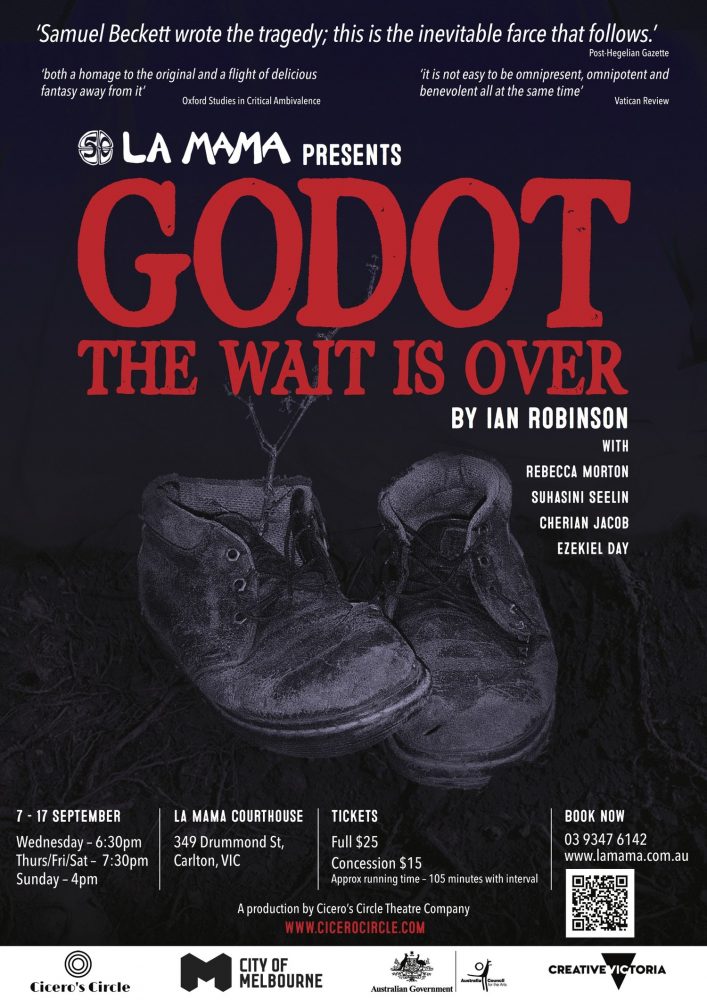