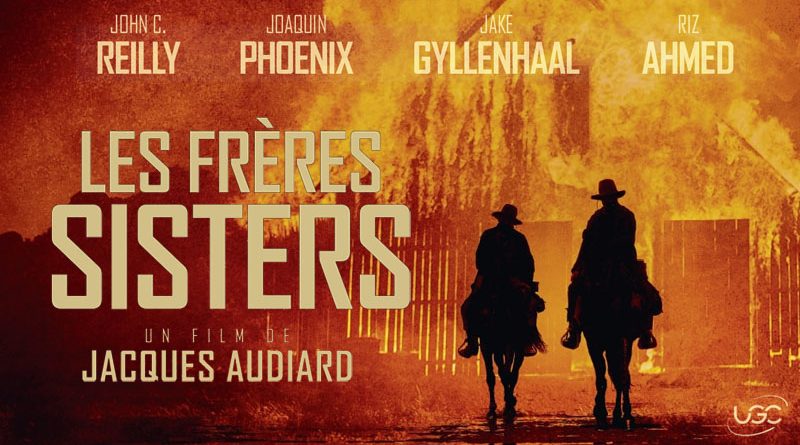 When I went to a film screening as part of the Alliance Française French Film Festival, what I didn’t quite expect to see was a film that was English-language, a western set in the United States, but also filmed in Spain and Romania. Yet that was exactly what happened. In the grandeur of the Astor Theatre, I watched the new film from acclaimed French director Jacques Audiard, Les Frères Sisters (The Sisters Brothers). Audiard was in attendance and gave a talk prior to the screening, in which he commented, to the audience’s amusement, that even he didn’t know why an English-language western was in the French Film Festival.

Based on the 2011 novel The Sisters Brothers by Patrick deWitt, this is a dark yet comedic take on a tale set in the ‘gunslinging Old West’. The two brothers of the title are Charlie (Joaquin Pheonix), the troubled, rough and violent cowboy, and Eli (John C. Reilly) his long suffering older brother trying to keep him out of trouble. The complex and well thought-out characterisation of the two brothers, and the two men they’re following (played by Jake Gyllenhaal and Riz Ahmed); as well as the layered storylines of each characters’ past make this a distinctly French style film, despite the setting and story.

As expected in the western genre, there are many shootouts and extended shots of the main characters riding across the plains. Yet, Audiard gives us an unexpectedly realistic take on the classic western genre. His use of darkness and light adds a great sense of authenticity to gunfights, which for once include many misses. The opening scene of the film is one such gunfight occurring in the darkness of the night with the only light in the obscured landscape being sparks from gunpowder as each man shot. Likewise, the amount of time spent reloading guns was shown more realistically than the usual quick-draw shootouts we’re used to seeing on screen.

In somewhat the same vein as Quentin Tarantino’s graphic westerns, like The Hateful Eight, this gritty tale is not for the squeamish. At one point there’s a spider scene – you’ll be glad I warned you about this. While Charlie and Eli are sleeping in the forest, we see a tennis ball sized spider crawl into Eli’s mouth. I’m not sure exactly what happened on the screen as I couldn’t watch, but I could hear the gasps of those who were still able, in apparent fascinated horror. It is during this stage in the film that there are some of the stranger moments. While Eli wakes up from his uncomfortable night’s sleep with a swollen face due to the spider, Charlie has apparently killed a bear that came to their camp. It is probably the second most unclear, decontextualised moment in the movie, besides a strange dream scene of Eli’s. This dream/memory scene, while Eli is affected by the spider, seems totally disconnected to the rest of the story and a gratuitous, unnecessary moment included by Audiard. It would’ve been great to have heard his views on this, but not being familiar with his other works, I don’t know if it is signature of his style.

Like so many westerns, the film involves a great deal of riding across the plains before the characters move on to the classic motivation in any vaguely crime-related story: gold. If you can go along with the premise of some questionable science on how to find gold with a few easily persuaded cowboys thrown in, you’ll enjoy the ride. With some comedic moments and good dialogue, it was a shame that the actors mumbled at times. I’m not sure if it was for realism, but it meant I had to strain to understand what may have been crucial dialogue (perhaps subtitles would have been handy after all). However, despite the mumbling and a slightly drawn-out ending, this is an unexpectedly good film. With some great cinematography and direction, this film tells a story that merges a personal family drama, with the gold rush past of the United States, in a harsh and violent atmosphere. It is no wonder Les Frères Sisters has been nominated for awards at film festivals around the world, winning in the cinematography and best director categories at film festivals in France and Venice.

Les Frères Sisters is screening as part of the French Film Festival until April 9.

BREAKING DOWN BARISTA BARRIERS: Alumna Bringing Accessibility Technology to Cafés Near You