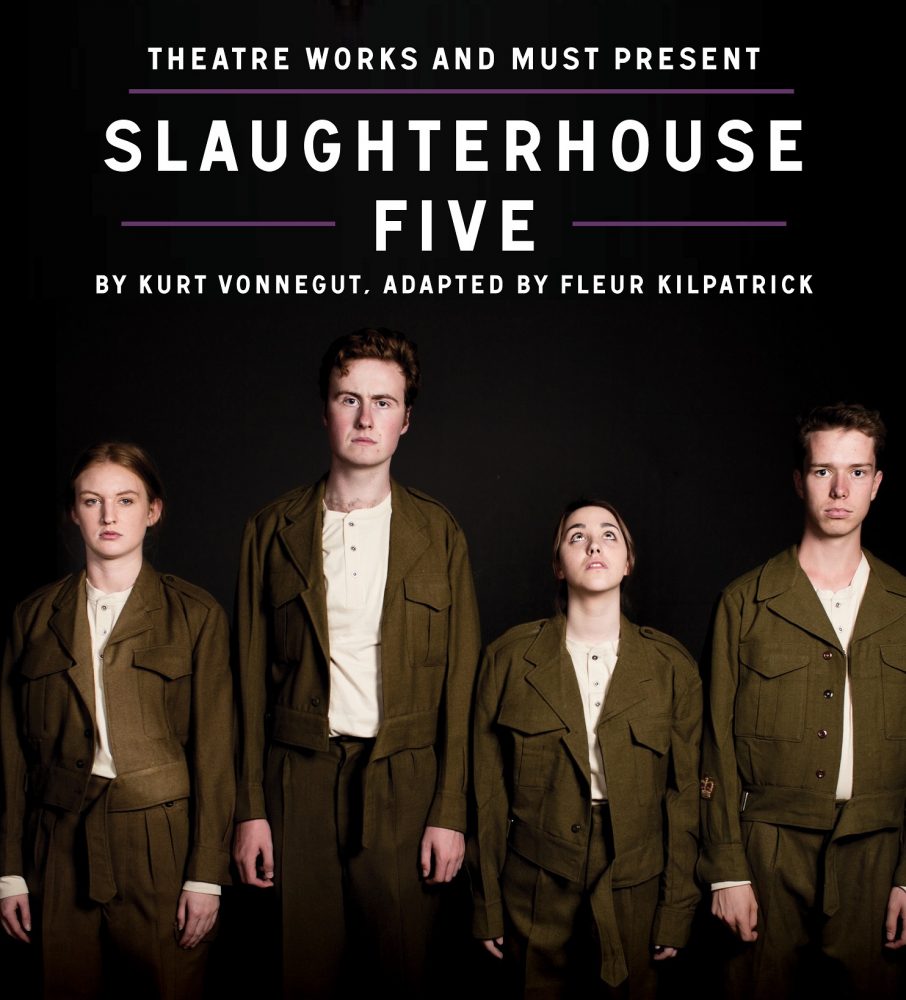 On at TheatreWorks at the moment, Slaughterhouse Five is a new adaptation by playwright Fleur Kilpatrick of Kurt Vonnegut’s famous 20th century novel. Protagonist Billy Pilgrim is a man for whom life is irrevocably changed by World War II, in particular, the bombing of Dresden. Kilpatrick is both adaptor and director of this play which is an intense adventure through the 20th century seen through Pilgrim’s eyes. As said at the start of the show, the events depicted are real, well mostly. The aliens maybe not so much (who knows??), but Pilgrim’s experiences as a prisoner of war and what he sees in the bombing of Dresden apparently reflect Vonnegut’s own experiences.

I have not read Vonnegut’s novel, so I was a bit confused by the story, but it actually didn’t matter.  Early on, a chronological timeline of Pilgrim’s life is constructed, which is a helpful outline, but time jumps back and forth, even within scenes throughout the entire play. It’s kind of the point. I’m not sure if it is alluding to PTSD and the idea of reliving the war or something a bit more science fiction. So for those who haven’t read the book, definitely go in expecting an extremely confusing timeline as scenes jump back and forth between the World War II, the 1960s, life on an alien planet and everything in between. But the acting was superb and the story, despite its outlandishness and alien aspects, is totally believable.

All the actors are from MUST and should be given commendation for their performances. From soldiers to housewives, opticians to aliens, this cast is versatile as they allow every scene to come to life. A special mention must be given to the singing scenes, which were done really well with fantastic harmonies.

There is simple but highly effective staging, using costume changes and blackboards to illustrate time jumps and show movement within scenes. One great example of this is the train scene during the war, where the blackboards are slid across the stage and each time a new train carriage is seen. But although it revolves around the war and its impact on Pilgrim, it’s not all serious, there are many funny moments, even in the war scenes.

The one drawback of the show is the length. Running for about two and a half hours including the interval, the show is a bit long. I’m glad I ate something beforehand. I feel I may have enjoyed the second half more if some of the longer scenes hadn’t felt so repetitious or drawn out.

The concluding scene truly delivers for Vonnegut’s anti-war message, tallying the deaths of the Dresden bombings in such a way that when the lights went down, the audience sat in absolute silence. This is great theatre and whether or not you’ve read the book, I think this show is well worth attending.

Slaughterhouse Five is playing at Theatreworks until May 5th. If you’re a student, Theatreworks offers $15 rush tickets subject to availability 30 minutes prior to performances. If pre-purchasing, use the “MUST20” promo code at the online checkout to get a $20 ticket.