The Museum Of Old And New Art

We’re on the ferry to MONA and it feels a little like we’re being taken to some secret, evil lair.  As we reach the jetty, staff in stiff black coats usher us up over 100 stairs cut into beautiful faces of natural sandstone. We are given iPod touches and a quick tutorial on how to use the MONA ‘O’ app, then take a spiral staircase through a bed of rust- and sand-coloured stone to the basement level of the museum.

Since MONA opened in January 2011 it has received critical acclaim from around the world and become a drawcard for tourists in Australia. The museum is architecturally stunning, and full of works that are confronting, disturbing and sometimes breathtakingly beautiful. Tasmanian millionaire and gallery owner David Walsh has described MONA as a Disney Land for adults; it certainly includes all of the entailed thrills and stomach churning moments.

Nearly 400 artworks are displayed, each without text – a technique which encourages a plurality of readings of the works. Guests can utilise a GPS on the iPods to ‘find’ the works they are near and tune into interviews with the artists, and read short tweet-length ‘ideas’ about the works and theoretical essays listed in the category of ‘art wank’. Basic details such as the name of the artist and where and when each work was created are also included.

There is a certain ambience generated by the partial darkness and exposed construction of the gallery space. Guests move about in their own bubbles of consciousness as most have headsets on and are enjoying the freedom of feeling their way through the gallery at leisure. Drawcard works are the controversial The Great Wall of Vagina by Jamie McCartney and Cloaca Professional by Wim Delvoye. The reputation of these works precedes them; they are colloquially known, respectively, as cunt wall and poo machine. We have already heard about each from our taxi drivers.

Other pieces fulfil the promise of the title of the museum, combining ‘old’ and ‘new’. Cabinets of old coins and subtle ceramics are lit in such a way that each artefact glows poetically in the dark. The presence of cutting edge contemporary art and ancient artefacts reinforce the juxtaposition of life and death confronting the spectator at every turn in the collection.

A standout work for me, a second-time visitor to MONA, is the sound work The Two Sisters, by Susan Philipsz. Maybe it is because I have come to Hobart with my twin sister, someone I don’t see very often, but this work moves me greatly. Another reviewer described this work as “evocative and harrowing,” which is fitting given that the inspiration is a morbid 1956 Scandinavian folk song The Twa Sisters, which tells the tale of a woman who remorselessly drowns her younger sister in an act of sexual jealousy. Regardless of the backstory, this work is composed to emotively affect the listener. I stand between two tall speakers and close my eyes, and am immediately enveloped by the subtle beauty of strings arrangements composed as two channels of sound which are different but harmonious.

There is a huge amount to see as we travel up through rock and the three stages of the gallery. From Bit.fall, a clever combination of engineering, information technology and art by Julius Popp (pictured), to Jannis Kounellis’ Arte Povera installation work Untitled, which references Picasso’s Guernica and utilises everyday materials to evoke themes of resistance, MONA is bursting with works that make you think and respond. For some visitors that response is a feeling of nausea or disgust; for many the experience is an enlightening one.

In Conversation With Lois Peeler 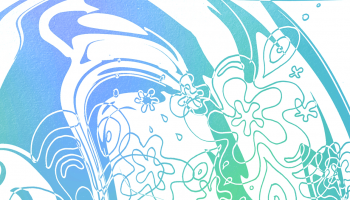