“My parents wanted me to be a dentist”: Aladdin Composer Alan Menken

Music composer Alan Menken is the man responsible for the musical scores in The Little Mermaid, The Hunchback from Notre Dame, Aladdin, Beauty and the Beast and countless other films and musical theatre productions. He has won a staggering eight Oscar’s, eleven Grammy awards and a Tony award. Menken is only second to Alfred Newman for Oscar wins, but you wouldn’t know that if you met him: Menken is a modest, studious kind of composer who is more interested in the process of working and creating than in reaping in the accolades. “I’m always absorbed in my work. I barely have time for anything else,” he says.

Like many artistic geniuses, Menken’s parents weren’t exactly expecting a music composer for a son. “Everyone in my family is a dentist. There’s no doubt that my parents wanted me to go to dental school.” This was hardly an attractive prospect for a young Alan Menken, who “couldn’t think of anything worse” to do with his life. Luckily, from an early age, he displayed a notable flair for composing and piano performance, which made his dream of composing a conceivable reality.

At age nine, Menken won a prestigious piano award in New York. Unlike others, this wasn’t achieved through long, repetitive practising, nor did it inspire in him an urge to start practising more rigorously. Fondly recalling his formative years, Menken laughs at how he “never liked practising. It was always so…boring.” Reciting and replaying represented a mundanity for Menken that was avoided by embracing “reinvention and experimentation” with music. 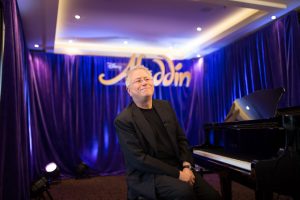 Menken began to ply his trade as a composer in the musical theatre arena in the early ‘70s. He began to emerge as one of the most promising American composers with his musical theatre take on Kurt Vonnegut’s novel God Bless you, Mr. Rosewater in 1979. Menken and his friend, playwright Howard Ashman, followed up with Little Shop of Horrors, which ran for a spectacular five years in New York. After establishing themselves as musical theatre powerhouses, Menken and Ashman were approached to compose and write the music and words, respectively, for The Little Mermaid, and then continued their success with Beauty and The Beast.

Tragedy struck when the two of them were working on Aladdin. Ashman, who was HIV positive, died after a long and painful battle with the illness, not having completed his work on Aladdin. Prolific lyricist Tim Rice stepped in to finish off Aladdin with Menken. Even now, it is clear to anyone that Menken has not recovered from the death of his “friend”, as his otherwise cheerful and affable personality was replaced with a pensive solemnity when Ashman was brought up. Their symbiotic, creative relationship had deeply penetrated Menken beyond that of mere obligation. This was most apparent when Menken mentioned that ‘Proud of your Boy’ – a song pulled from the film, and written alongside Ashman – was inserted into the Aladdin musical. “That was really special, having that in the musical. I always thought it was a great song,” Menken said. The most prosperous of creative times were sadly brought into a wider, more sobering context for Menken.

Menken had kind words for his second artistic companion, Tim Rice. He acknowledged Rice’s professionalism and talent for writing lyrics. Since 1992, Menken and Rice have been regular collaborators: working on the musicals of The Beauty and The Beast, King David, and Aladdin. Looking back on his output with both Ashman and Rice, Menken said that it “has been unreal, just unreal” to have scored the music that has defined many thousands of childhoods.

It is years since his career began, but Menken still carries the eagerness and enthusiasm for music, which is mostly reserved for the newcomers. He entered the room with a noticeable jump in his step, and played a medley of his discography with an infectious intensity and authenticity that completely blanketed the promotional nature of the press conference. But his hard-won successes haven’t overwhelmed his personal, humble love of composing.  Speaking of his achievements, Menken noted that “it’s not about you. You need to love the process, the characters, the story.” Nor does he take all the credit himself, recognising that Disney had helped him reach a “greater audience” that he otherwise would not have. 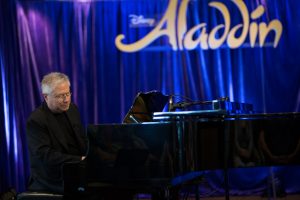 Despite feeling much more comfortable creating than promoting, Menken thought the Melbourne production of Aladdin is “fantastic. All the actors, and everyone involved, do a great job. It’s really exciting to see.” And he takes a particular joy in hearing his music live: “I think the audience engagement with musicals is unparalleled. You can see children with smiles on their faces, and families having a wonderful time.”

Menken will soon begin work on new songs for a live-action film of The Little Mermaid. After that, there is no doubt that he will immerse himself into another exciting project. But what project that is may even be a mystery to Menken himself.

Aladdin is showing at Her Majesty’s Theatre until 22 October. Tickets can be purchased via Ticketek. 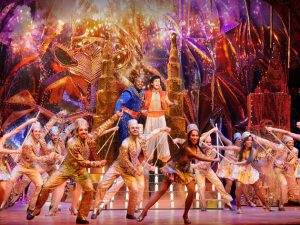