Virginia Gay is poised to remind Melburnians of the magic of theatre, setting this front and centrestage in her adaptation of Edmond Rostand’s Cyrano de Bergerac. Cyrano is coming to Melbourne Theatre Company’s Southbank Theatre, directed by Sarah Goodes and starring Gay in the title role, later this month.

Virginia Gay has been remarkably productive over the past 18 months. When the pandemic hit, many felt understandably stifled by the limited, socially distanced options available to while away the time. Not that there was anything wrong with resting or partaking in some of the more garden variety lockdown activities; one could learn how to bake sourdough bread (tasty), turn to trusty Netflix to fill the void (comforting), or perhaps succumb to cyberloafing the WFH days away (benefits debatable). Or, one could write two new plays and have them developed and ready to be staged mere months later. Gay’s fresh adaptation of the classic French play Cyrano de Bergerac is one such product of the latter option.

Gay, best known for her work on the Australian silver screen (All Saints, Winners & Losers), on the big screen (Judy & Punch) and on stage (Calamity Jane, Vivid White, The Beast), is now adding playwright to her already impressive CV. As well as penning the adaptation, Gay is starring as Cyrano herself, gender-flipping the traditionally heteronormative role and love story, and presenting modern audiences with a joyful, musical celebration of queer romance and hope. 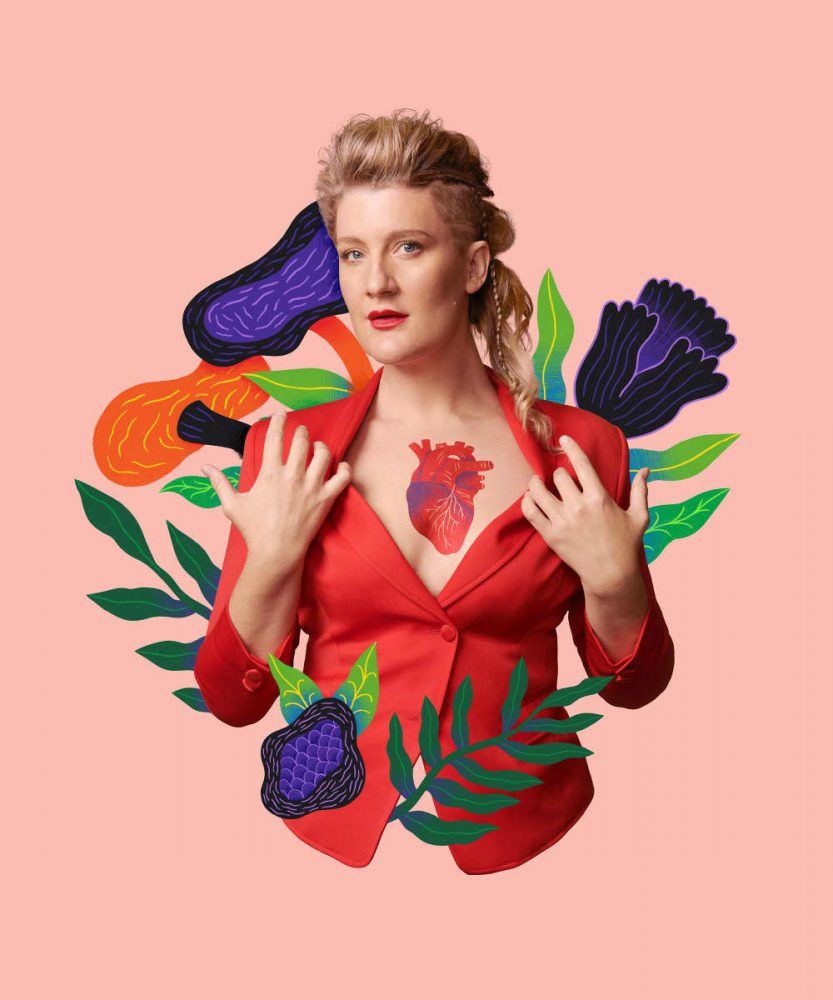 The play’s source material, originally written in 1897 by Edmond Rostand, is described by Gay as something of a “proto rom-com”. Cyrano, the insecure but clever, talented wordsmith falls in love with beautiful Roxanne. Roxanne is equally brilliant and shares Cyrano’s penchant for poetry. However, Roxanne is enamoured by Yan. Though beautiful, Yan is dumb. Yan isn’t able to express his reciprocal love for Roxanne in words like Cyrano can. That is, until Cyrano starts funnelling her witty words through Yan’s pretty mouth, resulting in a set-up ripe for a romantic comedy packed with heart and laughter and love.

Writing her adaptation of Cyrano during a global pandemic gave Gay the chance to reflect on the essence of what she believes this play is about: “somebody in a suspended state of longing… reaching for something they know they cannot touch”. In a time where so many are separated, unable to connect with one another physically or in ways they might otherwise want to, Gay seeks to tap into this collective longing for connection through laying bare her protagonist’s vulnerabilities.

In addition to exploring the condition of loneliness, isolation, and the often scary prospect of being vulnerable, Gay’s vision for the show is ultimately to create a “fucking glorious celebration of everything that is theatre – that thing we haven’t been able to do for the past 18 months”. Hoping that the show will “give people a huge dose of everything wonderful about theatre and everything they have missed”, Gay has prioritised bringing those magical “moments of heartfelt truth” to theatre-deprived audiences. This is, after all, a play about a woman who trades in poetry and theatricality, and understands the powerful effects they can have on people and in shaping the world in which they exist.

Pinning down exactly what it is that makes the shared experience of being in a theatre so magical is not difficult for Gay:

“I love theatre because it is all of us in a room together… we collectively decide to enter into this imaginary space. The reason people turn to art and theatre is that we cherrypick the best and worst bits of life and pack them into incredibly consumable, short forms. Theatre and art take little moments of truth and vulnerability and joy and hope and turn up the dial on them, so that they are even more sparkly, then give it all back to the audience.”

This intention to treat theatre as a live, mutual exchange between performers and audience is built into the show – physically, literally, metaphorically, and metaphysically. The show is set in an abandoned theatre, and is as much about remembering how to put on a show and deal with an audience as it is about the romance and longing. Gay tells me that the way she invites an audience into a world she has created is by having a direct conversation with them: “You should have an open flow of energy and literal communication with the audience, they are the final character and are different every night”.

The power of language, voice, and agency is also central to Gay’s play. Playing with the idea of how a writer like Cyrano creates a kind of character in Yan through which to siphon her words is very much connected to the “extraordinary alchemy” that occurs in live theatre; that transformation of written words on a page into something that feels “true and fresh” to both performers who deliver and audiences who receive. Insisting that each of the six characters in the play have their own individual voices, and giving the character of Roxanne agency, was a further creative decision Gay felt was necessary in order to tell this story to today’s audiences, and to tell it right.

Gay takes her responsibility as a playwright and storyteller to further progression, rather than reinforce existing stereotypes, seriously. Taking the liberty, and care, to adapt this work into something resonant and relevant to audiences in 2021 was perhaps the biggest challenge for Gay in adapting this work. Gay explains that part of her privilege as a storyteller with a platform is to “change the stories we tell our children – you can’t be what you can’t see, [and without changing those narratives] there is no progression”.

So, how exactly does one turn a romance premised upon the catfishing and manipulation of a woman into something acceptable? Based on her track record (see, e.g. Calamity Jane), Gay is more than up for the challenge. Though we must wait with bated breath to see what Gay has come up with, one thing she can discuss is the (new) happy ending. Gay emphasises that not having all the characters die at the end (as is the case in the original play) was non-negotiable. “If you have a queer female Cyrano played by a queer female Virginia Gay, I will not add to stories that say queer love is impossible and you should kill your gays… I have no interest in telling those stories and adding weight to those stories”.

As at the time of publication, the viability of Cyrano going ahead with previews on 31 July as planned is still up in the air. Whether Melburnians will have the privilege of seeing Gay’s work on stage next week is partially in the hands of our Premier and partially in the hands of our fellow citizens. Melburnians doing the right thing by masking up, getting tested, and getting vaccinated will no doubt help us return to our theatres quicker. And for the sake of this extraordinary show alone, those efforts are worth it. If there is one that can help us remedy that universally understood, collective feeling of hopelessness we’ve all experienced over the past year, it’s going to be Gay’s Cyrano. I certainly know I’ll be first in line to witness Gay weave her magic on stage once again. You, reader of these words on your screen, should be the next.

Cyrano (plans to) run from 2 August to 4 September 2021. Readers under 30 may wish to take advantage of MTC’s under 30s pricing (50% off a full ticket price). For more information and to purchase tickets, visit https://www.mtc.com.au/plays-and-tickets/whats-on/mtc-2021-act-2/cyrano/.