Directed by Ruben Fleischer
3 stars out of 5

“Back for seconds? After all this time?”

Unlike Columbus’ (Jesse Eisenberg) seemingly never-ending list of rules for surviving the zombie apocalypse, the Zombieland films themselves seem to only have one clear mission statement – to get the audiences having a good time. There’s more to a film than any one aspect, of course, but for this particular film to be a success, the film doesn’t necessarily need to achieve anything more than that initial goal. To end your suspense, this film succeeds. However, that doesn’t mean it is without flaws. In fact, this film is decidedly average. Nevertheless, the film makes it very easy to have fun without needing to rise from your seat, and when that’s clearly the film’s main priority, there’s no real reason to fault that.

Zombieland: Double Tap appears to be a story about growing up. Set ten years after the first instalment of the Zombieland franchise, Little Rock (Abigail Breslin) has matured and is now an adult, which is difficult for the remainder of the Zombieland family to accept. Change is inevitable – even when you live in a post-apocalyptic world teeming with the undead. However, the film seems to have an ironic conflict of interest with itself. By adopting a similar plot-line and structure to that of its predecessor, it shows little growth or change in ideas. Likewise, there’s nothing plot or humour-wise that is particularly original about the film. In fact, the film prides itself on its consistent references to popular culture (some being funnier than others). When the film hits the mark, the audience can’t help but laugh out loud. Unfortunately, certain jokes feel too unoriginal. One particular joke was essentially an extended version of an iconic moment from another famously popular zombie comedy, Shaun of the Dead. Nonetheless, even when the film isn’t at its peak humour, audiences will still be grinning from ear to ear throughout, purely based on the sheer joy funnelling from the screen into the audience.

There’s not a boring moment throughout the film. When the gang are out exterminating zombies, it is always shot in such a way that it never feels rehashed or stale. The visual composition and style of the film may be crafted in a similar way to the first film in the franchise, but there is absolutely nothing wrong with that when the style of the first film is what made it so unique and enjoyable. When the gang aren’t being swarmed by the undead, the world-building and the film’s character interactions keep the film buzzing – a testament to both the returning characters and the newly introduced characters. This film keeps you laughing even after the film is over, as the mid-credit scene deserves a special mention for perhaps being one of the most humorous parts of the film. My only wish is that the film’s standard of comedy maintained that height throughout the film, rather than once every so often.

The returning cast includes Woody Harrelson as Tallahassee. Harreslon is as wonderfully and comically portrayed as the hardened survivor audiences grew to love in the first film, yet added a new emotional depth to the character in the form of his new, self-appointed role as Little Rock’s father figure. Little Rock is the character who has evidently grown the most between the two films. The added maturity of the character is evident through Abigail Breslin’s performance, which still succeeds in maintaining the youthfulness and cynical delight of the character. Jesse Eisenberg’s Columbus is perhaps the most consistent character from the two films, and Eisenberg’s charm as the meticulous and at times awkward persona is difficult not to love. Emma Stone’s strong-willed survivor Wichita delivers every line, punchline, and punch with precision and comic ability, proving herself, as always, a wonderfully strong actor. These four leads play off each other extremely well, and their chemistry and banter stand the test of time.

The newly introduced characters all add something wonderfully fresh to the film. Zoey Deutch is a standout as Madison, playing up her character’s aloof nature to brilliant comedic effect, and stealing the scene whenever she’s on screen. Avan Jogia’s hippie Berkeley provides a great contrast with the other characters by having a non-violent and relaxed personality. Rounding out the cast is Rosario Dawson as Nevada. As zombie hunter, monster truck extraordinaire, and Elvis romantic, she performs with exceeding charisma. These characters definitely rely heavily on stereotype, which could be seen negatively. However, the fact that the film exaggerates these stereotypes so strongly seems to fit well within the established, outlandish world of Zombieland, and as a result, make wonderful additions to the film.

This sequel is simply an excuse to return to the world of Zombieland and catch up with the characters that audiences fell in love with ten years prior in the original film, but I don’t think anyone is complaining; nor should they. The film doesn’t have anything new to say about the laws of zombie killing, and nor does it always meet the comedy mark. However, at its heart it is fun, and it doesn’t necessarily need to be anything more. I would gladly welcome a third instalment in another ten years – the only condition being that the cast and creatives have just as much fun as they clearly had in making the first two. 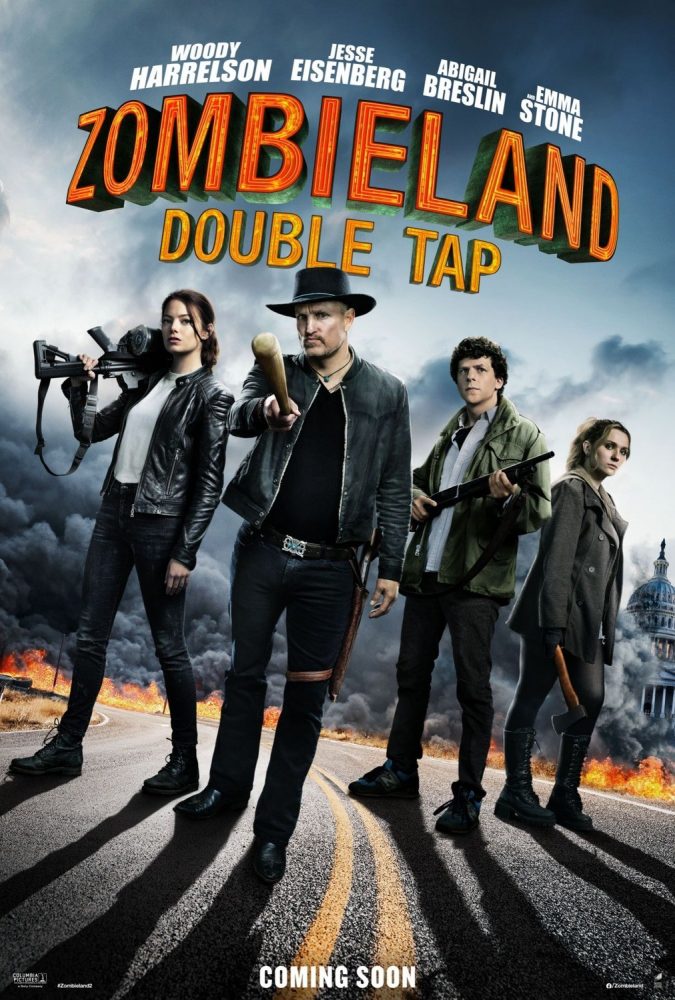