Brittain Ashford’s characteristically emotive vocals and ambient sounds are at their finest in her latest collaboration with Matt Bauer, Day Inside a Night. This four-track gem of an EP worms its way into deep recesses of the soul and settles there, lingering like an unshakable memory. Ahead of the EP’s release on November 13, the Brooklyn based performer and singer-songwriter generously navigated time zones to speak to Lot’s Wife about her music, her hopes, and her humbling life lessons from Broadway.

A deeply introspective quality pervades Day Inside a Night, both in sound and subject matter. It’s difficult to render in words the emotional depths that Ashford and Bauer reach in laying bare the wisdom of their introspection. In “Night in Saguaro”, we feel a brief flicker of anguish as Bauer murmurs, “Aching for a dream becomes a poison love”. Elsewhere, Ashford’s poignant concession, “Now I’ve made the mistake before / Confusing kindness for love” is a moving acknowledgement that makes the imploring chorus in “Ugly” all the more compelling. Combined with the atmospheric instrumental backing, Ashford and Bauer’s stirring voices evoke a mood incredibly conducive to self-reflection and internal musing.

For Ashford, looking inward comes easily, “particularly right now when we are alone with our thoughts a lot more than normal”. In her view, internal deliberation need not involve a self-castigation of everything we’ve done wrong. Rather, “offering yourself kindness and forgiveness…and knowing that it’s ok to acknowledge that we are not perfect” is important, and I would add, a liberating approach to take when tapping into such raw and challenging emotions.

This display of strength in vulnerability and tenderness is particularly evident in the first-released single of the EP, “Ugly”. It’s an extremely personal song, and it resonated with me profoundly. Despite coming from a place unique to Ashford’s own experiences, her rousing plea to “Show me your ugly heart” speaks directly to anyone who has yearned so desperately to give and to be let in, and to say to someone let yourself be seen.

Ashford admits that performing such personal and emotionally heavy material, or indeed any music, can be exhausting. This is especially so given that Ashford strives to “live” in each song she performs. However, she explains this is an intrinsic part of who she is as a performer. “I am intricately attached to all the stories [in my songs], even if they aren’t my own stories,” Ashford says. “The narratives and stories I create feel like they are part of me.”

Notwithstanding these weighty, expressive qualities, there is an unmistakable undercurrent of hope throughout the EP. Hope is something I was particularly interested in asking Ashford about, in light of the current pandemic and tense political climate in the United States.

“When things started… I didn’t panic. It was definitely one day at a time, and some days felt easier than others,” Ashford says.

As a musician, Ashford hoped that her music would take peoples’ minds off what was happening around them.

“At least initially, being a musician and coping with the pandemic felt easy enough, because playing music is so much of who I am… it’s in the fabric of my makeup. As things stretched on, and we got into some super important social justice issues in the United States, it became clear to me that it wasn’t as important in that moment. There were a couple of months where I didn’t want to work on music because I felt like there were other things… other places I wanted to put my energy.”

Now, Ashford is learning to find the balance.

“I can still be mad and go to protests… but I can also make music, because people do need outlets to not just doom scroll on their phones.”

Regrettably, support at a governmental or institutional level for artists and all of the workers in the US arts industry is minimal, or non-existent. This feels like a familiar blow for Australian arts workers, many of whom were unable to access the Morrison government’s JobKeeper payments introduced in response to the pandemic.

The universality of this lack of support for the arts is a little depressing, but Ashford tries to see the positives.

“The pandemic has really put a spotlight on a lot of inequities within both theatre and music… this moment has allowed Americans to see people who are musicians and artists struggling right now… to see how the ecosystem works, in a way that some people may not have been aware of.”

As for the future of live music and theatre once the pandemic blows over, Ashford is also optimistic. While it is devastating that many smaller, independent venues will not survive, Ashford believes that artists will figure it out.

“The need for music will always be strong, it’s just going to look different.”

Just how music and theatre will look in a post-coronavirus world is yet to be seen. I mourn the prospect that it will likely be many years before we experience something remotely close to the immersive musical theatre Ashford is also known for. Indeed, many musical theatre aficionados will be familiar with Ashford’s inimitable voice from the popular 12-time Tony-nominated Broadway musical, Natasha, Pierre & The Great Comet of 1812, written by Dave Malloy. This revolutionary adaptation of a 70-page slice of Tolstoy’s War and Peace involved a loose (or rather non-existent) conception of the fourth wall, pierogies for the audience, and a set design that allowed for virtually every part of the theatre to be considered viable playing space. For her heartrending performance as Sonya Rostova, Ashford received critical acclaim and a loyal fan base across the globe (a category to which I unabashedly identify myself with). Ashford has also starred in another Dave Malloy created musical, Ghost Quartet, a non-chronological, multigenerational song cycle that weaves together four interconnected stories, backed by a captivating score.

Naturally, as an admirer of Ashford’s work in both Great Comet and Ghost Quartet, I was keen to hear about her experiences, having been involved with these shows since their inception. In the case of Great Comet, this included having the song “Sonya Alone” specifically written for her voice. Similarly, Ashford was able to develop her own individual parts in Ghost Quartet, enabling her to showcase her mad autoharp skills, among other talents.

Originating the role of Sonya in Great Comet allowed Ashford to “fall into acting” – something she never set out to do – and has brought her all the way to the pinnacle of musical theatre: Broadway.

Ashford says she “hasn’t ever worked harder on any one thing in [her] entire life”.

“I have worked very hard as a musician and have done a lot of footwork to book shows, go on tours, play shows… I built up work ethic, but doing Great Comet also changed how I perceived performance and [my] ability to work with other people. Doing the show made me more humble and gracious.”

Responding to nasty reviews and people who write off the show is something else this experience has taught Ashford to deal with. While she might feel initially disappointed by those who aren’t willing to depart from their fixed view of what art should look or sound like, it’s not possible to be (and Ashford doesn’t want to be) “someone who is universally adored”.

However, Ashford does invite people to give things a chance, perhaps a couple of listens, before they decide not to like it – and not just in relation to her music, but all music. Taking this approach to art encourages an open-mindedness that just might reveal new concepts of “what the world holds”.

Ultimately, Ashford hopes that her music will give people an outlet.

“If someone hears one of my songs and goes, ‘oh I feel that way, and I’ve never heard someone express it that way’, or ‘I didn’t realise someone else felt the same way I did’… to me, that is what I hope to accomplish as a songwriter – to be able to express something that makes someone feel a little less alone.”

In the writer’s humble opinion, Ashford has done her job.

The Salt: a “solid, moody, interesting album” released in 2016 by Ashford’s band, Prairie Empire – start with this one.

Prairie Empire: follow up The Salt with the band’s debut self-titled folksy charmer.

Tinsel and Snow & Other Mid-Winter Missives: Day Inside a Night is not Ashford and Bauer’s first collaboration. Their 2018 three-song delight is a highly recommended alternative for those who can’t stand obnoxiously merry Christmas tunes. Stream it now, just in time for the festive season!

Be sure to check out the singles and 2008 album There, but for You, Go I released under Brittain Ashford too – all well worth a listen.

Day Inside a Night can be purchased and streamed from November 13 via Bandcamp (https://brittainashford.bandcamp.com/album/day-inside-a-night) and all good streaming platforms (https://distrokid.com/hyperfollow/brittainashfordandmattbauer/ugly). 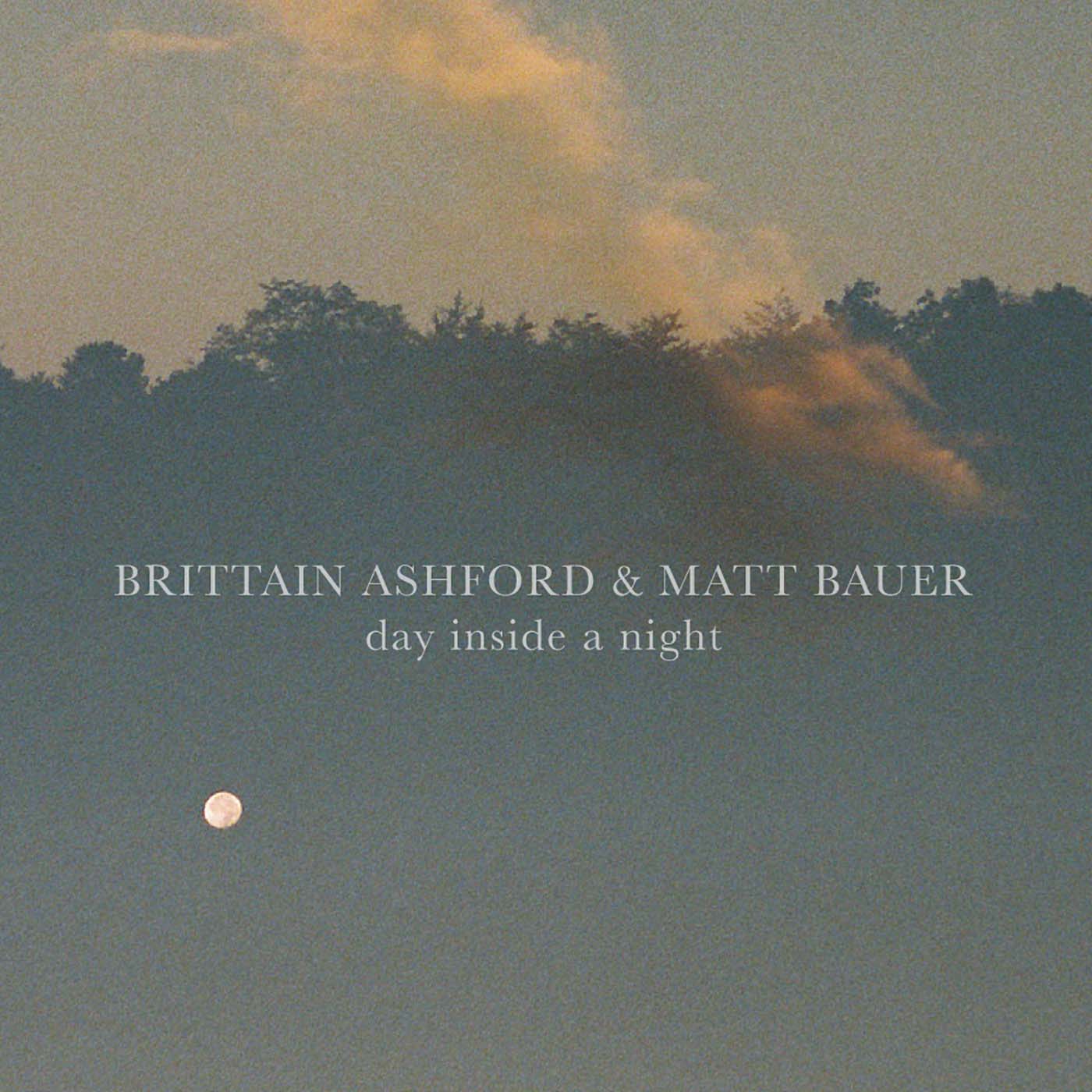