Far above the towering mountains that stretched for the heavens, and higher than the strongest most fearless birds dared to rise, above the dark water-laden thunderclouds and beyond the delicate semi-formed mists rose the gigantic city of Theoria. Ancient and proud it had floated between the clouds and stars for countless generations, bustling with activity and progress.

The streets were paved with stone, the houses a mismatched puzzle of brick and metal. Street lamps framed the sidewalks like silent sentinels, throbbing with artificial light all through the night, while the day was presided over by life.

Children ran through the streets, their parents calling after them to be careful,  workers climbed aboard the overflowing trains while their bosses commuted in chauffeur-driven limousines, and the persistent wildlife lurked and expanded within the overlooked cracks of society.

Two large national parks had taken the journey along with the city up into the heavens. One grew at the centre of the constructed jungle, small, quiet and peaceful. While the other grew ravenously to the north, untamed and cautiously explored. Both had allowed animals to flourish, and were the only source of nature that the occupants of the city had. However, isolation from the wild was a small price to pay for safety.

Thriving at the heart of the city were the four colossal skyscrapers that resided over the entire enterprise, each as different and as arrogant as the next. Government met in a steepled spire, carved and opulent like a castle from the ancient stories. The city’s administration was conducted in an elongated oval tower. The tower that spiralled up to a gigantic point marking the highest building in the city and the nerve centre for all communication.

The final and stoutest of the skyscrapers was the building of experimental science that consequently was frequented by explosions every few weeks—it was regarded with a fair amount of confusion and suspicion, as nobody really knew what went on there.

The entire city was encompassed by an electromagnetic dome that allowed the occupants to breathe while artificial gravity kept them walking on the ground rather than the ceiling, and although the systems were old they were kept in pristine condition, as was the engine that had raised the city into low orbit.

Countless generations ago when the ancestors of Theoria lived on the surface they were faced with a near impossible decision: to destroy a unique and unparalleled wonder or to leave Earth behind.

Discussion waged for decades and ultimately divided the globe. Scientists attempted desperately to find other solutions but to no avail, and as the nations tore each other apart a new order emerged. Lead by a man worthy of legend, but whose name was no longer spoken after his death, the cause grew in power as the least likeliest people found something to fight for and the discussion was closed.

Another twenty years passed and society was further ravaged by the danger that had initially divided them, but finally the space city was completed and named Theoria: the Vision.

It rose above the clouds with a noise like the end of the world and a shaking that collapsed almost half of the buildings, but the occupants rebuilt and thrived in the safety and freedom of their new haven, while those that remained behind on the surface fought for stability.

With the departure of the city the surface became more dangerous; the outbreaks more unpredictable and unstable. Half the population left on the planet were wiped out and with every update the occupants of the city became less and less hopeful that the surface could be saved.

And then one day everything went silent.

A semblance of control was established on the surface and casualties were reasserted to a minimum. The occupants of Theoria could rest easy, high above the danger and those on the surface were able to preserve their charge. Slowly and carefully the guardians reshaped the world in order to protect it until it sat, slumbering like a lounging dragon in its hoard: an endless expansion of corridors.

The Library covered the entire planet, stretching far across every landmass and connected by determined tunnels that traversed the ocean floor. It was a feat of apparent impossibility and extravagance, but also a feat of utter beauty.

The bookshelves stood tall and magnanimous, books reaching high into the dark recesses towards the towering ceiling, rows upon rows extended far beyond the size of any reasonable building, corridors twisted and turned like Daedalus’ Labyrinth and every surviving book that had ever been written on paper with ink, resided upon the shelves.

A plan had been commissioned to reconstruct the Library with marble floors and dazzling wide windows, with crystal chandeliers and giant staircases that seemingly led to the heavens. But it was all impractical and abandoned. The logistics to build such a thing was impossible to accomplish without setting off the slumbering enemy.

Silence hung thick and deafening through the aisles. There was no breeze to make noise or stir up the dust, and no movement of any kind. To walk through the stacks was to freeze time, to leave the world, to never die and yet never live. It was another world, never-ending and eternally drenched with stillness, yet buzzing with energy. It sent shivers down one’s spine, caused the hair on the back of your neck to stand on end, movement in the corner of your eye, whispers just out of earshot and the terrible, constant feeling of being watched.

And the knowledge that you were.

The greatest enemy and wonder the world had ever faced was so simple and so complex that it had been impossible to predict, defeat or understand. The unquenchable enemy were the books.

It was discovered that the combination of organic ink, organic paper and abundant passion that had been directed into each page had resulted in immortal energy being forged within the covers. It was the unbreakable bond of thought and life that resided within the paper-thin pages that could never be snuffed out. It was imagination stronger than love and spirit. It was hope. It was magic.

The energy had of course remained dormant for thousands and thousands of years until something awoke it. Theories were abundant.

Had it been the meteorite that crashed into Australia’s desert? Was it the sudden increase in temperature from global warming? Did it have something to do with the destruction of the Bristlecone Pine Forest in California? Or was it an indicator of the end of the world—the dead rising again to plague the living?

And rise the books did. The energy stated discharging randomly, lighting fires and burning entire buildings but leaving the books themselves unharmed. They began to move by themselves, falling off shelves then throwing themselves across the room, at people and through windows. Some seeped black goo, others leaked water and then they started affecting things completely separate from themselves.

The episodes were impossible to predict and grew worse and worse, until it was realised that it was the interaction with life that affected the books worst of all. For the pages were created from trees and became decomposing dead life, as was the ink, and the addition of an everlasting idea, emotion and imagination forged something more powerful than science.

The Library could never be renovated, for the interaction with life would be too unpredictable; and so the shelves stood as they had for generations. The ground was metal, the walls coated with glass, the bookshelves twisted pieces of wrought iron, and each book separated from the next by a piece of inorganic material that had never lived before.

Slowly the complex became more difficult to care for, the tunnels begun to leak, sections collapsed and the books discharged once more; but the guardians remained vigilant, continuing their sacred job of protecting knowledge and imagination. The surface remained relatively stable and Theoria neither understood nor cared about the working of the giant Library and never interfered.

But curiosity cannot be prevented, and in time there comes someone new who isn’t sated by stories read through screens, who is intrigued by stories that take up space rather than gigabytes, and who may be related to the hero whose name was forgotten so long ago.

“Is it true I’m related to the hero?” A small wavering hand shot into the air, and a small face with round eyes blinked eagerly up at him.

“No stupid, he was talking about me!” The boy next to her snapped.

The girl’s face grew red, her eyes flashing angrily with the tell-tale sign of the beginning of another fight; and the teacher in the corner stepped forward with the intention of ending it, and story-time, before it started.

“In actuality, no one knows what happened to the hero. He could be related to any one of you.” The storyteller continued swiftly, settling the dispute and salvaging the rest of his lesson.

The small hand shot once more into the air. “But didn’t he stay on the surface to protect the books?”

The storyteller leaned back slightly and nodded. “That is what he did at first. He was one of the original hundred guardians that remained to protect the Library, but it is said that prolonged proximity to the books changed him; it gave him long life and extensive knowledge of all things. He could be anywhere; he could be in this very room.”

The children all gasped and looked around, suddenly suspicious of the cupboards, tables, ceiling and even each other.

The storyteller fought back a chuckle and addressed them once more. “Of course this is just a story, and although the magic isn’t quite so real the Library itself remains on the surface. It needs new guardians who care for the books like they are living things, because they just might be.”

“Okay then.” The teacher smiled widely and strode decisively forward. “If you will all thank Mr Wyle for his enchanting story we will then return to our maths.”

The children obediently burst into applause, the occasional thank you was called out, and the storyteller bowed before making his way to the door.

“Miss, is the story real?” A young boy blatantly asked the teacher.

“No, of course not Jared. Now go get your computer.”

The man paused, one hand on the doorknob and turned around. The young girl who’d interrupted him was staring, her face scrunched up in confusion and deep meditation. He smiled, brought a finger to his lips and winked.

Maybe the Library could still be saved. Maybe there were still some guardians to be found in the new generation. Guardians that still believed in magic. 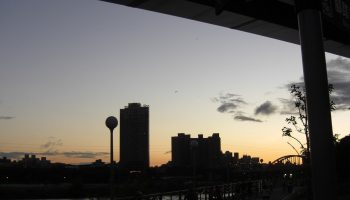