Editor’s Note: The opinions expressed in the piece are the author’s, and are not necessarily representative of the views of Lot’s Wife. The author is a member of the Australian Labor Party.

In many ways, Victorian Premier Daniel Andrews finds himself fighting a war on two fronts; chiefly, against the COVID-19 pandemic (the health, societal and economic consequences of which will be felt for generations to come), and most ridiculously, against both the Victorian and Federal Liberal parties, hellbent on undermining him at every turn.

Regarding the former, one would be hard-pressed to find legitimate criticisms for the clear, cautious and consistent implementation of policy and messaging that the Victorian Government has rolled out over the past two months. The declaration of a State of Emergency on March 16, when the state had only 71 cases, granted the Chief Health Officer Dr Brett Sutton additional powers to issue directions and provide guidelines to the general public. Less than a week later on March 22 when the newly formed National Cabinet pressed Andrews, along with other Premiers and Chief Ministers to re-open schools, Andrews would not be moved from his stance, informed by Dr Sutton, that schools should be shut to limit the spread of community transmission. Breaking from the ranks, he announced that Monday, March 23, would be the last day of Term 1, bringing school holidays early a week. A week later, the Premier emphatically declared that Term 2 would be conducted wholly online, urging those that “those who can learn from home, must.” Now, with infection rates manageable, Prep, Years 1-2 and Years 11-12 will return on May 26; with all year levels back by June 9.

Now with the benefit of hindsight, both the declaration and extension of the State of Emergency to May 11, as well as the transition of schools and businesses online, have played pivotal roles in keeping Victoria’s total number of cases to 1,507, with between 110 and 120 of these remaining active cases and in quarantine. On 27 April, in order to get a better understanding of the presence of COVID-19 in the community, the Andrews government announced it would aim to test 100,000 Victorians in the two remaining weeks of the State of Emergency, so as to detect, trace and isolate cases that may have slipped through the cracks. Many thought the goal of 100,000 was ambitious, but by May 11, some 161,000 Victorians presented themselves to be tested. This is by far the largest and most comprehensive testing effort in the country, testing up to three times more people a day than the next state, New South Wales.  The logic behind this was very clear: you can’t combat what you don’t know exists.

Dr Sutton stressed that slightly increased numbers of new cases were actually a good thing, stating at the May 11 press conference with the Premier that “every case discovered is an opportunity to end that chain of transmission… we’ve discovered thirty cases from the 141,000 results we have. That’s thirty chains of transmission that otherwise would have gone untested and unknown.”

The vast array of testing information allowed the Andrews government to make a series of cautious announcements at that press conference, including the allowance of up to five people in your home and ten in outdoor settings, as well as allowing slightly larger numbers for weddings, auctions and funerals. Cafes, restaurants and pubs remain open only for takeaway, and those who can work and learn from home must continue to do so. The State of Emergency was extended to May 31, with the Premier announcing that if numbers continued to decrease, there could be opportunities to open more businesses with more customers permitted. The Government will aim to test another 150,000 Victorians to facilitate this. The Premier’s announcement also gave the AFL and NRL the green light to resume training, and allowed plans for the resumption of their respective competitions. The announcements are cautious, and a stepping stone for the gradual return to normal life.

However, despite the Premier and Chief Health Officer’s apparent success in limiting the spread of COVID-19, placing the state in a position many in the world would happily trade with, Mr Andrews has had to endure a plethora of unfounded and desperate attacks from both the Murdoch media apparatus and Liberal party politicians.

Federal Education Minister Dan Tehan’s May 3 appearance on the ABC’s Insiders program was the first in a series of undermining and agitating comments from a frustrated federal government. Minister Tehan labelled Mr Andrews’ decision to keep schools closed a “failure of leadership,” and accused the Andrews government of “taking a sledgehammer” to the state’s education system, which remains the best in the country. Minister Tehan might have wished he chose his words more carefully, given the history of his party in Victoria; Jeff Kennett’s government infamously closed several hundreds of schools, the effects of which are still being felt today, as the Andrews government works to rebuild a hundred in the next eight years. On the theme of destroying an education system, the Federal Government need only look within their own policy decisions, having now changed the qualifications for its flagship economic recovery policy JobKeeper three times to exclude all universities from being eligible. The entire tertiary education sector, Australia’s third-largest export, has been left helpless, with enrolments plummeting and workers, the vast majority of which are casuals, left vulnerable. The ignorance and sheer hypocrisy of using the phrase “failure of leadership,” given the Prime Minister’s hopeless handling of the recent bushfire crisis, should also not be lost on anyone. So soon and so wide was the outrage to Minister Tehan’s comments that a formal apology and retraction was issued just four hours later, but one has to wonder the likelihood that such a premeditated and deliberate drive-by of the Premier was ordered by the Prime Minister’s Office.

The catastrophic nature of Minister Tehan’s interview, as well as the backlash he received should have served as a clear indication that the last thing anyone needs or wants right now is partisan sniping during a global pandemic. Enter the Victorian Liberal party. Their leader, Michael O’Brien, has consistently misjudged the COVID-19 pandemic, having insisted in March that the Andrews Labor government should still be able to deliver a budget surplus, failing to understand the economic repercussions soon to come. Occasionally appearing from the shadows of obscurity to kick up a fuss, the State Opposition Leader seemed to blame COVID-19 on the Victorian Labor party, stating that the state “urgently needs a path out of Labor’s lockdown,” leading one to only imagine how a Liberal government would respond to the crisis. 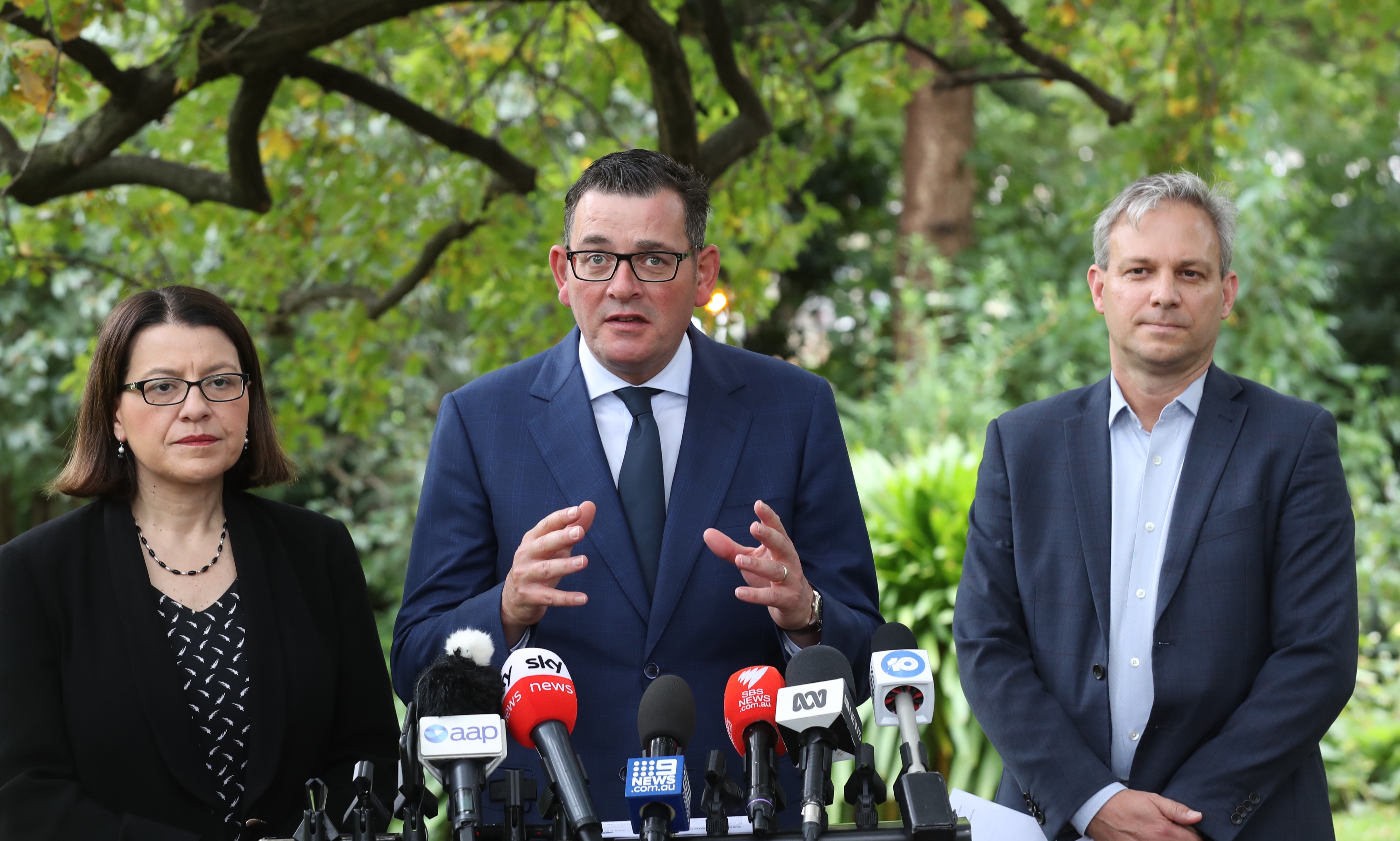 Tim Smith, the local Member for Kew who inexplicably called for native bats to be removed from his electorate, somehow managed to be even more controversial. Calling the Premier a “loony […] obsessed with telling people how to live their lives”,..a “fear-mongering doomsday propagandist” and, with a straight face, “Chairman Dan,” Mr Smith’s comments make more sense if read satirically. Tim Smith then suggested the Andrews government does not care about the mental health of its citizens, minutes after calling the premier a “loony”, indicating how much he actually cares about mental health in Victoria. Michael O’Brien was forced to come out and publically caution the ambitious shadow minister later the same day. However, this is not an isolated incident, as just last month Smith ripped into Dr Sutton on Twitter, accusing him of giving “bullsh*t” advice. For reference, Dr Sutton is a renowned epidemiologist with extensive experience and clinical expertise in public health and communicable diseases, placing him slightly more qualified than Tim Smith, a former lightweight rower.

However, it’s not just state Liberals who are immune to sharing their unhinged criticisms of the Premier, with several Victorian federal backbenchers chiming in also. In addition to Minister Tehan, the Liberal Member for Higgins, Katie Allen, came under fire for a tweet calling out Daniel Andrews’ for “deferring” the implementation of the National Cabinet’s Step 1 right away, despite repeated statements outlining that all announcements would be made May 11. A doctor by profession, Dr Allen claimed that there were “less deaths in Victoria from covid (sic) than annually from the flu”, and while that may be true, we don’t go into quarantine every flu season as it’s far less deadly and spreads much slower than COVID-19. Tim Wilson, Member for Goldstein, also claimed the Premier is “enjoying the clampdown too much in terms of the authority and power it’s given him, and not as enthusiastic to roll it back” in a radio interview with the ABC on May 9. One has to wonder what enjoyment could possibly be gained from asking people to stay at home during a global pandemic to preserve the health system and ensure more people, especially the elderly and immunocompromised, don’t tragically die. Perhaps the comments and inferences insinuated by Wilson were actually unfounded ideological attacks by a former head of the IPA.

The public undermining and questioning of the Premier and his government, as well as being illuminating of the kind of politics deployed by the Liberal party over the last decade, is quite dangerous and unnecessary. Despite all of this, Daniel Andrews remains unmoved in his convictions, a big part of his personal appeal. He was quick to announce the State of Emergency, and quick to close down schools and implement online learning. He’s remained clear and consistent since the outbreak began, refusing calls to rush the easing of restrictions and sticking to the May 11 D-Day date outlined last month. And despite the public opposition from and condemnation by the Liberal party, Victorians have so far backed him; Andrews is one of the most popular leaders in the country with an approval rating of 75%, and a staggeringly low disapproval rating of 17%.

For the meantime, the Andrews Labor government remains a thorn in the side of the Morrison government, a nuisance that they can’t criticise without seeming desperate, hypocritical or ignorant. Victorians already emphatically backed Daniel Andrews back in 2018, and just shy of 18 months later, it’s becoming increasingly evident why.

We are always happy to hear opposing views. If you would like to submit a reply to this piece, please contact us at lotswife.submission@gmail.com