Attempts to describe Mirrah Foulkes’ first feature film have been moderately successful. Variations of “batshit crazy”, “offbeat feminist revenge tale”, and “eccentric dark comedy” have all been valiantly offered by cast and critics alike, yet the film resists any attempt at an all-encompassing definition. Judy and Punch is all of these, and more.

Tonally, structurally, and aesthetically, Judy and Punch creates a unique environment to plant the origins of the traditional British Punch and Judy puppet show. The film’s setting is the roughly 17th century fictional town of Seaside (nowhere near the sea): a generic kind of Hollywood medieval village, whose superstitious townspeople live simultaneously in fear and eager anticipation of the next witch hanging or “Stoning Day”. Such executions are almost exclusively reserved for the old, poor, or unlucky women whose chickens might all drop dead one night, or who are caught staring at the moon for suspiciously long periods of time.

Amongst this motley crowd live our Judy (Mia Wasikowska) and Punch (Damon Herriman). Travelling puppeteers by trade, the charismatic wife and husband performing duo return to Seaside with their infant child, though not without loftier ambitions and dreams of bigger towns and theatres. Judy, the more talented and hard-working of the two, makes the most of the situation despite perhaps feeling stifled by the closed-minded town. Punch, however, struggles to resist the temptations of drink and old flames. Inevitably, his descent into drunk batterer (a disturbing real-life manifestation of his marionette alter-ego) leads to tragedy. In a dramatic scene so masterfully crafted that audiences are catapulted from relief, to shock, to tragedy and back again, the fate of our protagonist Judy seems sealed.

However, Judy refuses to play the victim of Punch’s big, bashy stick. Her broken body is found dumped in the forest by a group of “heretics” – former Seaside misfits who have been cast out of the town – and is slowly nursed back to health by mystic-healer Dr Goodtime (Gillian Jones). Here, counselled by various members of the heretics, including young girl Scotty (Daisy Axon) (who will soon have everything she needs in life once she moves onto a bigger pony) and group leader Ma (Virginia Gay) (who packs up the heretics to move to a new camp, without really specifying where), Judy is able to plot her sweet, sweet revenge.

Foulkes’ writing is sharp, slick and playful. Its balance of slapstick comedy and visceral drama carries across to the screen, and is superbly delivered by a strong ensemble cast. Their solid performances enable extreme tonal shifts and deliberate anachronisms to be pulled off deftly and un-jarringly, resulting in a truly original product. Additionally, Francois Tetaz’s ingeniously kooky soundtrack is an unexpected highlight, complementing the film’s peculiar tone suitably.

While Judy and Punch trades in caricatures that may not be recognised by viewers unfamiliar with the original Punch and Judy traditions, the premise of the film remains clear and its plot stand-alone. Those who do understand the nod to tragic baby mishaps, the sausage-stealing dog, treacherous crocodile encounters, and the Devil’s ultimatum with Punch, are no doubt in for a satisfying added bonus.

It is inevitable that a film so boldly whimsical will not hit its mark with everybody. Some particularly outlandish scenes may leave audiences feeling alienated, or even plain disgusted. Judy’s optimistically polemic speech at the gallows is not the subtlest statement on accepting differences and the perils of blind faith, nor the most realistic remedy for Seaside’s social and judicial problems. However, it is difficult not to appreciate Foulkes’ innovative take on such themes. In particular, her considered treatment of domestic violence and xenophobia should be applauded.

Judy and Punch appears to be part of a popular trend that sees re-interpretations of traditional myths and fairy-tales, or so-called ‘speculative fiction’ make their way to the small and large screens. Fans of Angela Carter or Margaret Atwood may indeed find their answer to the outdated, misogynistic Punch and Judy show in this twisted, fairy-tale-esque cracker of a film. Judy and Punch is brilliant, bizarre (in the best of ways), and an utterly compelling must-see when it arrives at a screen near you.

The reviewer watched Judy and Punch at a Melbourne International Film Festival screening. Judy and Punch is showing at Cinema Nova from 7 November 2019 and will be released nationally on 21 November. 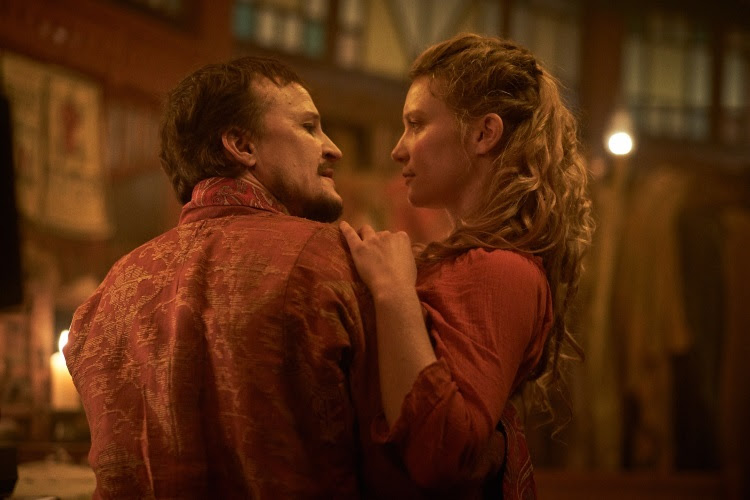