There are so many adaptations of fairytales around, from books to film to ballet, that it can be hard to choose what to go see, especially when many are tailored towards young children. Bluebeard’s Castle, an electro-opera performance by BK Opera, is very much suited to an adult audience. It is a tale not for the faint of heart, with no Cinderella-style happy ending to be found.

Upon arrival, the stage was interesting to look at, with fairy lights and a glittery set indicating that this would be unlike any ordinary opera performance. The program was fabulous, bound in a children’s story book cover; and after the usual details about the director, composer and singers, the version of Bluebeard that was being adapted was artfully crafted in fairy tale form, with lovely illustrations accompanying the text.

A highlight of the performance was Adrian Tamburini’s performance as Bluebeard. As an actor, he brought a tortured nature and menacing presence to the character in his facial expressions and movement on stage, while his voice was fantastic, bringing emotion and malevolence to the character’s songs. In addition, the glittery blue beard he had added to the character and tied in with the backdrop, filled with glittery yet dangerous things like swords, skeletons and jewels.

The other character of the story, Judith, performed by Zara Barrett, was also very strong vocally with a beautiful voice. However, her emotional acting was not as strong as Tamburini’s and her costume was not as believable, as it was mentioned in one of the songs that she had blond hair yet her wig for the role was red.

The setting of the performance was perfectly appropriate for the story, with sparkly wall hangings, glittery objects and ominous lighting, set off against a giant jewel heart at the centre of the stage. Lighting designer Jason Bovaird did a great job creating a dark and menacing atmosphere in the ‘castle’ that contrasted well with the bright moments when sun was said to be streaming into a room. Unfortunately, the two leads did not interact at all with the set, it was more of a backdrop than an interactive stage, and as such the audience had to rely on their imagination when the actors described different rooms. For a story about locked doors to scary rooms, the singers didn’t once make a movement similar to opening an imaginary door, meaning there were jarring moments when the two were arguing about opening the door and then suddenly were reacting to what was inside the room.

In addition, the lack of prop usage meant that the audience needed to stay engaged with what was happening in the songs by reading the surtitles and following along with whether the characters were in a room or not, along with what it was they were reacting to. Disappointingly, the surtitles, which are like subtitles but for the stage, were placed oddly in the set, with two monitors, one on each side of the set angled towards the audience, often blocked by the singers as they moved about the space. At times they stood right in front of the monitors and members of the audience could be seen leaning from side to side trying to read the surtitles. This was unfortunate as the opera was in Hungarian and so the audience needed to be able to read to follow along.

Composer Béla Bartók’s opera has been staged in an interesting new way through the use of electronic music melded with orchestral melodies. Conductor James Penn did a great job fusing the two seemingly disparate genres to create a soundtrack that heightened the tensions and created a sense of danger in Bluebeard’s castle, while it flourished in the optimism of Judith. The musical prowess of Tamburini and Barrett was highlighted in this show, even if the story was, at times, slow and hard to follow.

Bluebeard’s Castle by BKO is playing at 8pm on August 8 and 9 at Northcote Town Hall. 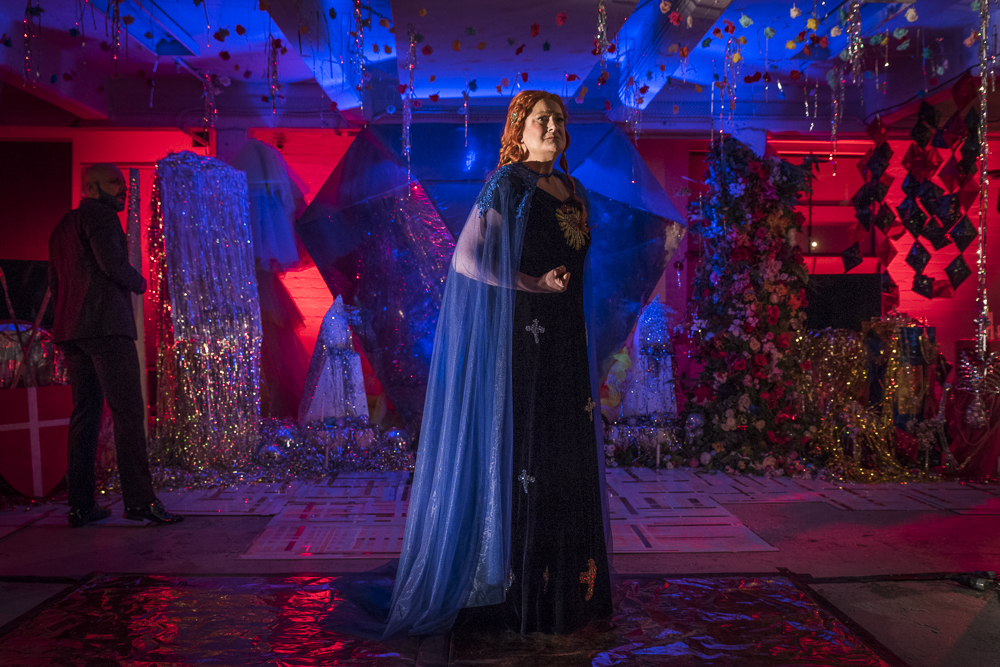