The new musical Come From Away tells the extraordinary tale of a town called Gander in Newfoundland and what happened to it on September 11, 2001. Changing the United States and the world irrevocably, 9/11 especially changed how we travel. We’ve all heard of 9/11, but what many of us might not know about is what happened to all of the planes that were diverted when the US airspace was closed for the first time in history. In fact, this  musical is the tale of the 38 planes that arrived at Gander airport and for a few days the population of the remote Canadian town was almost doubled as the ‘come from aways’ were brought into the lives of the locals. Opening their homes and supplying whatever nearly 7,000 people could need, not to mention taking care of the animals in the holds of the planes, the show highlights the compassion of the people of Gander. This is a story of humanity, but above all, it is the story of people, who come together in a time of crisis.

A winner of Oliver Awards in the UK and nominated for Tony awards in the US, Come From Away is an amazing story, extremely well told. With a very strong cast who all inhibit multiple characters, those living in Gander and some of the almost 7,000 ‘come from aways’ from the planes, including the flight staff, and with no interval, you will be immersed in the world of Gander from start to finish. The book, music and lyrics by David Hein and Irene Sanko and great direction by Christopher Ashley make the storytelling of this show the star. Each song flows really well into the next and the lyrics blend humour, honesty and despair perfectly so you’ll be laughing out loud one minute and tearing up the next. 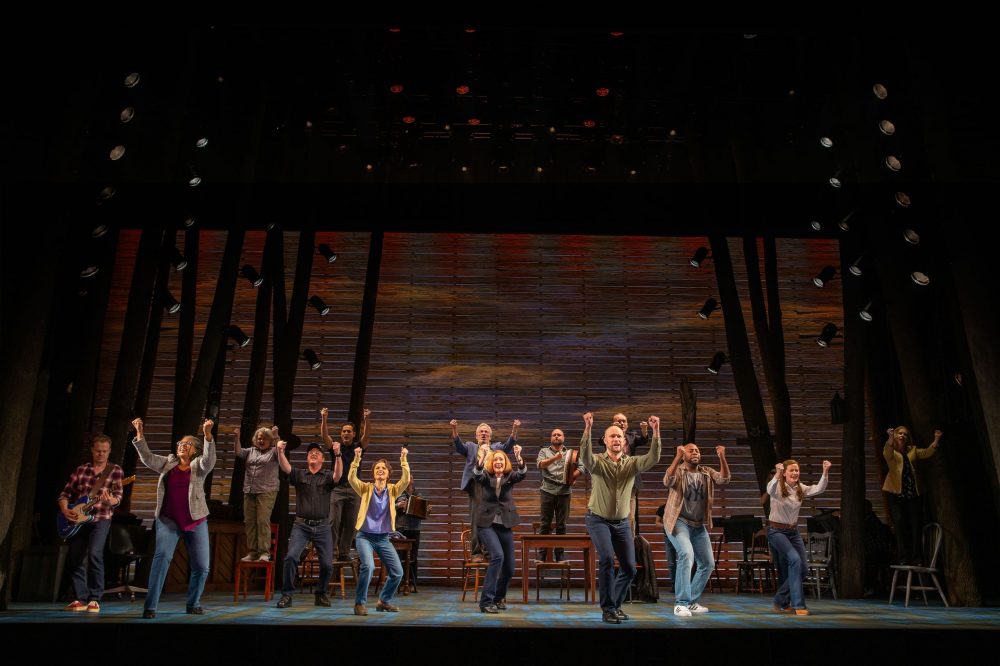 The whole cast was fantastic, seamlessly switching between characters and accents without lengthy costume changes, a credit to the costume designer Toni-Leslie James. I would like to give a special commendation to Kolby Kindle, who plays Bob and others, for his acting as his facial expressions and tone of voice made the characters he portrayed memorable and one of the funniest characters of the show.

Throughout the entire show there was high octane, great energy from all members of the cast and band. I loved the way the musicians were celebrated, they were on stage throughout the entire show and at times they showcased their talents at centre stage. With such simple staging, it was amazing how a few simple lighting changes and movement of chairs could create a range of buildings, vehicles and outdoor areas in which the actors created the world of Gander.

This show is everything you could want in a musical and more. Even if you think you don’t like musicals or you haven’t seen anything on stage in a while, go to this show. It is not simply a musical, in fact, it is the narrative, the interwoven stories of all these people who came together for a few days, that really makes this show. Knowing that the stories are real makes it even better. Come From Away is one of those shows that does it all – you’ll laugh, cry and be moved by the stories of the plane people and the people of Newfoundland.

Come From Away is currently playing at the Melbourne Comedy Theatre.