The theatre beckons you, ‘Come, sit in the dark and feel something.’

It’s been so beautiful to see Melbourne come back to life. Masks off. Music on. Capacity limits increasing. With all of that comes the revival of our beloved local performing arts scene. Or sometimes, if we’re very lucky, something entirely new arises.

Enter Fever103. Now personally, I would have thought that lockdown would have been the worst time to start a theatre company, but their co-founders, Director Monique Marani and Producer Harry Dowling saw it differently.

Their take on Christopher Hampton’s 1976 play, Treats, was both comedic and confronting. Viewers become well acquainted with this duality over the two hours of the play. Hampton has previously explained that he wrote Treats in response to his work on the translation of Ibsen’s A Doll’s House, where the female protagonist decides to leave her destructive relationship in the end. In Treats however, Hampton focuses on a woman who stays put. 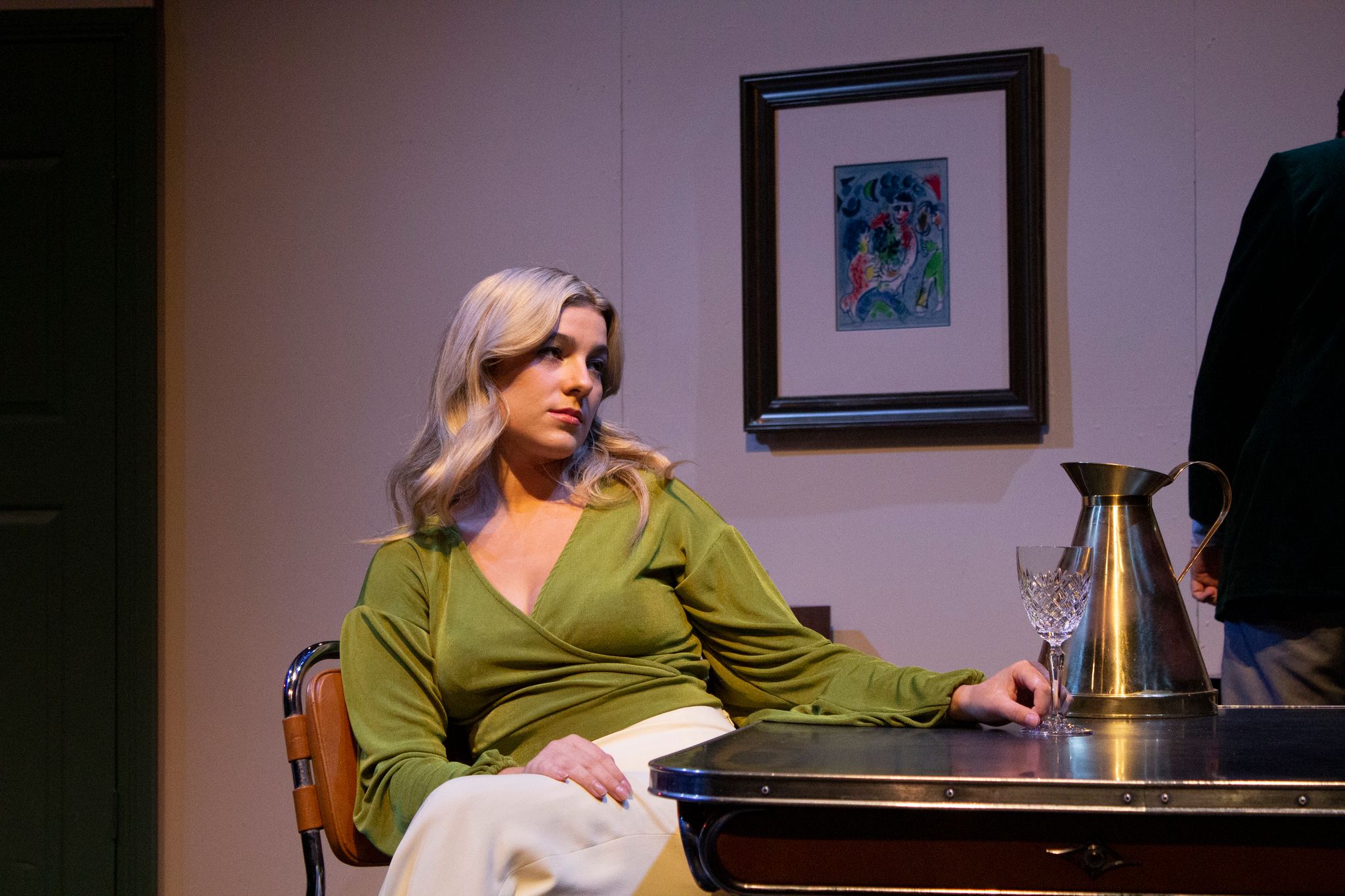 The entire play takes place in a disparaged English flat where journalist Ann (Ashleigh Coleman) lives with her new partner, the steadfast yet hapless Patrick (James Martin). Their mundane evening is interrupted when Ann’s ex-boyfriend, Dave (Nicholas Jacquinot), returns from reporting on the Turkish invasion of Cyprus and proceeds to force his way into their home and their relationship.

Coleman is captivating as Ann. She gives the character a lovely posh British accent that I want to say is from London. Her portrayal starts off as shrill and assertive as she articulates her desires to both of the men. Yet, as the show progresses Coleman draws out Ann’s vulnerabilities as she becomes increasingly distressed and subdued.

Martin brings nuance to the character of Patrick. Initially, Patrick is depicted as a befuddled fool who is the butt of every joke, but Martin’s acting emphasises the earnestness in all that Patrick does. He is trying to tell Ann he loves her, he is trying to accommodate Dave’s intrusion, he is just trying so hard. 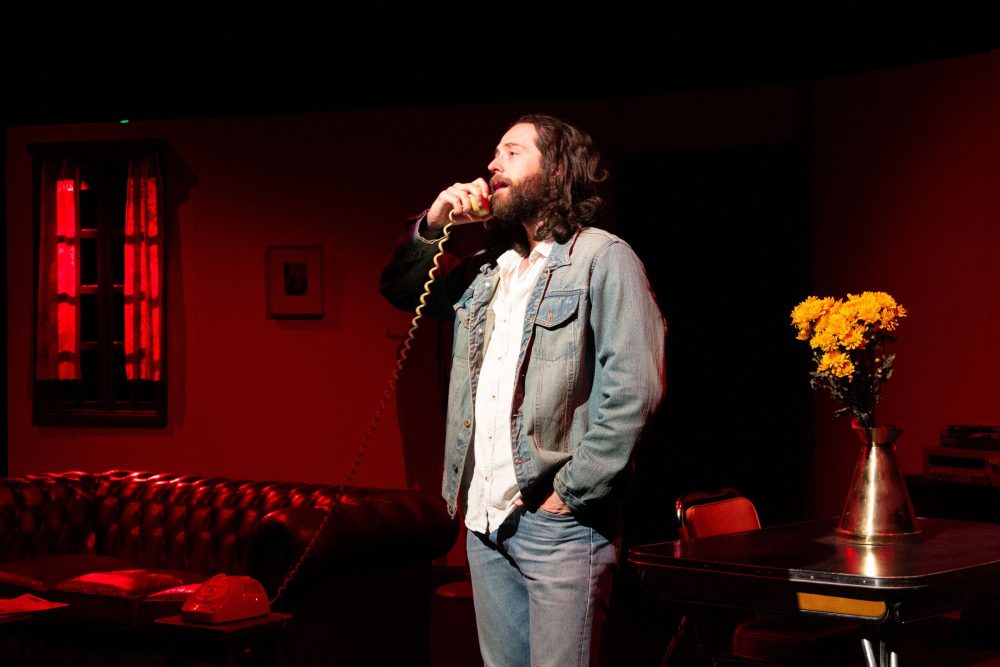 The role of Dave could be simplified to an aggressive, resentful man full of bravado, and Jacquinot’s acting certainly conveys this. If I met Jacquinot’s Dave on a train, I would change carriages. He is scary, provocative, and prone to violence. Yet Jacquinot manages to bring out the intricacies, insecurities, and traumas of such a man in his acting. I never liked the character Dave – nonetheless, I was startled by how much I could empathise with where he was coming from.

The polarising duality of each character shines through the direction of Marani. She has meticulously nurtured the flow of the show so that the shifts in the relationships of the characters are palpable, believable, and perturbing. Marani is not afraid to make her characters unlikeable. It is in this discomfort that she works her magic. Her added wordless scenes (to avoid copyright infringement!) are a compliment to an already enthralling script. Crucial to these scenes is the unsettling yet bewitching soundscapes of Daniella A. Esposito. 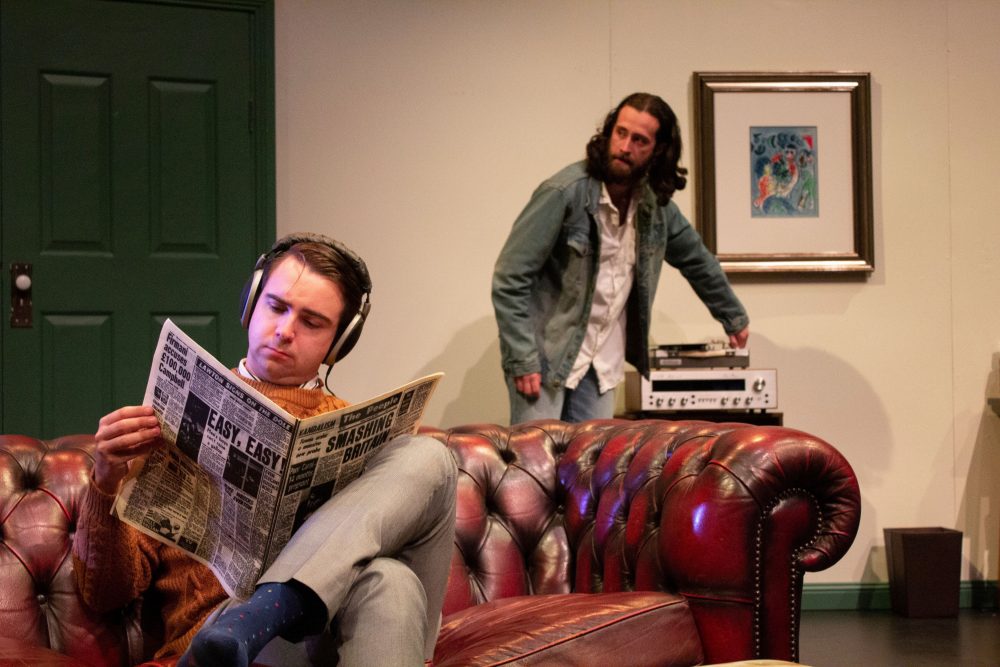 Ann’s flat is brought to life through the thoughtful set design and lighting by Georgie Wolfe. Most notably, Wolfe is responsible for the most enchanting window lighting in any play I have ever seen. My eyes were glued to the stunts and intimate scenes skillfully choreographed by Georgia Kate Bell. They reminded me of the way a car hugs a telephone pole after an accident; terrifying, impactful, still, but oh gosh you can’t look away. Oliver Scholast excels as stage manager. There were easily dozens of props, but the audience never notices a transition.

A bit of an interview…

I was lucky enough to sit down for a coffee with some of the crew of Treats at the Monash Club. Call me naive, but I was surprised by how close in age to them I am. Monique Marani and Harry Dowling have opened their own theatre company, while I have trouble opening Moodle and checking my grades. In fact, Harry is also studying at Monash and mentioned his heavy involvement with MUST (Monash Uni Student Theatre), along with other crew members.

Joining me at the table were:

Lot’s Wife: What’s your role in this production? Please explain it to me like I’m five.

Harry Dowling: It’s the producer’s job to co-ordinate all the technical and logistical aspects of the show. I run all the non-creative parts of the team.

Monique Marani: I manage the creative process. At the beginning, I select the text, which Harry has been heavily involved in. I develop a vision for the show, what we want to say with the show. The easy part is picking a play, there are so many good scripts out there. It’s deciding the message. I must have read Treats upwards of a dozen times. I was researching Piaget, Jung…

(Marani lists just about every psychoanalyst and theatrical theorists that my highschool Theatre Studies teacher taught us about, and then some. She’s brilliant.)

MM: My favourite part of directing is talking to actors. A character could have three lines and the actor should go through that process and know their favourite, childhood traumas, what they had for breakfasts, wants, needs, and desires.

Oliver Scholast: A stage manager is a really broad sort of job. A lot of it is making sure everything is safe. Admin. Running the show. Coordinating props…

MM: The stage manager keeps the chaos in check. The producer organises the chaos. And the director creates the chaos.

Georgia Kate Bell: And I witness it.

LW: Do you also choreograph it?

GKB: At times. I was brought on two weeks into the project. I worked with Monique to facilitate two main fight scenes and an intimate scene. It’s about making sure actors feel comfortable in scenes while making them realistic. In the same way a dance is choreographed, these scenes are planned to a tee, to ensure the scene can be replicated every night.

LW: One of my favorite lines from the presser [press release] Harry sent me was ‘you will see yourself in these characters for better or for worse,’ can you elaborate on that?

HD: That’s the thing. When you watch a play like this you’re getting a window into someone’s life. As with your own, if anyone was spectating you throughout your life they would see the good, the bad, and ugly. All kinds of things. There’s no good guys or bad guys in this show; there’s just people.

MM: It’s what we want to do with this company. We want to treat theatre as a galvanisation of the self. You are going to see yourself in all of these characters. That’s the human experience. It’s as exhilarating as it is disappointing, and boring. And painful. Life is very painful. But how better to celebrate that than through a beautiful drama like this.

LW: What’s one thing I should look out for when watching the show?

HD: Look out for the mirror and where you think it is.

(There’s a whole anecdote about him mashing strawberries during rehearsals that didn’t make the final draft. Watch me ask my editor for forgiveness).

MM: The moments of light and shadow.

Fever103 presented Treats at the Southbank Theatre from 8–11 April 2021. Be sure to keep an eye out for their future performances. With a debut like this, I can’t wait to see what they do next.

The 93rd Academy Awards – Who Should Win? Who Will Win?