Review — Once Upon A Time in Hollywood

Maybe you’ve never watched The Hateful Eight, Inglorious Basterds or even Pulp Fiction, and you have never heard of Quentin Tarantino. Maybe you have, and as a movie-enthusiast-slash-Quentin-Tarantino-fan, you are thrilled at the prospect of watching Once Upon A Time in Hollywood to experience, once again, Tarantino’s directorial greatness. Regardless, through a fantastical re-imagining of the looming period before the Manson murders that rocked the American entertainment industry, Once Upon A Time in Hollywood transports you back to late 1960s Hollywood where cinema and hippie culture intertwined; birthing a fascinating culture/class hybrid that managed to earn itself a one-of-a-kind reputation and an irreplaceable position in pop culture.

Set in Hollywood’s late Golden Age where the Western saw a steady decline in interest, Once Upon A Time in Hollywood narrates the sunset years of Rick Dalton’s (Leonardo DiCaprio) and Cliff Booth’s (Brad Pitt) careers as an actor and a stuntman respectively. Australian actress Margot Robbie, on the other hand, takes on the iconic role of Sharon Tate, a rising starlet who is in line to catapulting towards fame. Such an A-list cast looked promising, and it’s pleasing to note that they delivered indeed — DiCaprio’s acting has reached a level where it seems that every single character he plays is tailored specially for him, Pitt channeled his Inglorious Basterds masculine bad-boy persona into Cliff Booth, and Robbie’s Sharon Tate successfully embodied the playfulness and carefree spirit of the 60s despite having much less screen time than expected (considering that her role occupies almost one-third of the first movie poster). Onscreen chemistry between DiCaprio and Pitt was most certainly exemplary of good old brotherhood: both Rick Dalton and Cliff Booth exhibit traditionally ‘masculine’ behaviour, yet at the same time they take care and look after one another — take Rick vouching for Cliff for a stunt role, and Cliff taking up chauffeuring and technician duties for Rick. ‘Bromance’, indeed.

Credit is also due for the mise-en-scene in Once Upon A Time in Hollywood — the film sees a seamless marriage between Tarantino’s eccentricity and the rising brash, bohemian hippie culture in the late sixties: comedic scenes of Rick Dalton making embarrassing mistakes on set, a funny fight scene between ‘Bruce Lee’ (Mike Toh) and Cliff, a blend of hippie-oriented colour schemes and outfits, and slapstick humour-grounded screenwriting all intersect wonderfully. It is also worth noting that most of the Western scenes in the film are either direct references from actual movies, or parodies of a movie or TV show — clearly Tarantino and the film crew have devoted utmost time and effort, and seem to have had a lot of fun in the process! On our end as audience members, such aesthetics were pleasing to the eye and a visual treat overall. 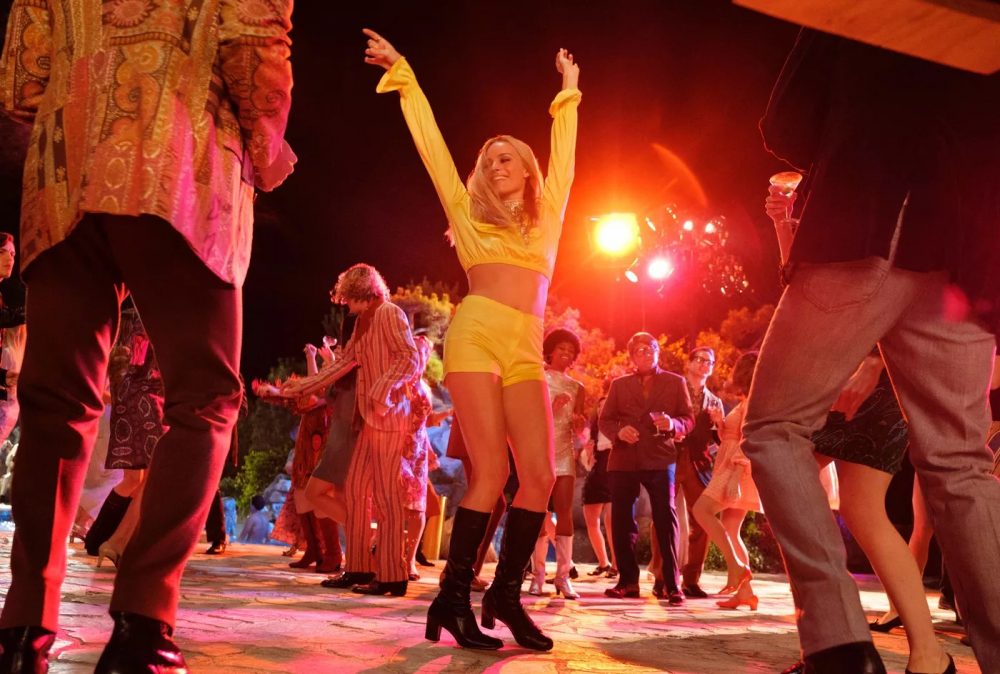 Plot-wise, however, it was a slow burn and this meant that signature Quentin Tarantino elements were, unlike in his previous works, substantially delayed. Preoccupancy with the aesthetics also resulted in my forgetting that I was watching a Quentin Tarantino film that is supposed to be loaded with ‘Quentin Tarantino-exclusive’ elements up until said elements appeared on screen — and whether or not this is positive or negative, will be up to the viewer to judge. Unlike Inglorious Basterds, Kill Bill and Pulp Fiction, Once Upon A Time in Hollywood is also not the Tarantino movie you would want to choose as an ‘appetiser’ film to a friend who has zero knowledge of the director’s movies. In that sense, this film can be said to be one that is made with a relatively high level of comfort from Tarantino’s side, with an intended audience base in mind.

Once Upon A Time in Hollywood is not only about the inner workings of the film industry, it is a celebration of cinema and the world around it at the time. It is hailing to the audience the end and the beginning of eras and everything in between. Once Upon A Time in Hollywood has once again showcased Quentin Tarantino’s prowess as one of the greatest auteurs of modern day cinema, and unlike the Western, the Tarantino brand/genre of movies is not going anywhere anytime soon. ★